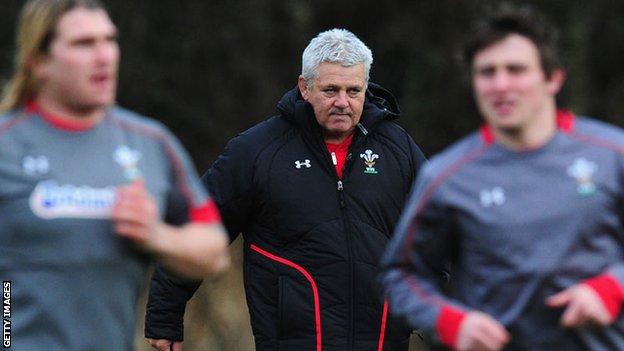 Coach Warren Gatland says he would prefer Welsh players move to France rather than England if they choose not to stay in Wales.

The Welsh face Italy in the Six Nations on Saturday with four France-based players in the starting XV.

"The beauty of France at the moment over England is [players] are able to negotiate full release and that means they can be with us," he said.

Clubs have to release international players during approved International Rugby Board (IRB) "windows".

But they are not compelled to let players take part in internationals or national training camps outside those agreed dates.

Wales' match against Australia in December fell outside the IRB window and Wales went into the game without Bath prop Paul James who had to return to his club.

However, Northampton Saints wing George North played against Australia - a move that resulted in the club being fined £60,000 by a Premiership Rugby (PRL) disciplinary panel.

Saints' decision to allow North to play in the game was ruled to be in breach of a PRL regulation that only England players are allowed to be released by teams to play for their nation outside of the IRB's international window.

Gatland is sensitive to the problem with Leigh Halfpenny the latest top-flight Wales player to join a long list of stars playing in France.

Halfpenny's move to Toulon was announced on 23 January, with the player having negotiated full release for international duties.

The former Wasps coach fears the exodus will continue, in spite of WRU efforts to keep players in Wales by offering central contracts.

"You have got half a dozen players who are not just good players they're world class players," said Gatland.

"As a result of their performances for Wales or for the Lions they are being targeted by big-spending overseas clubs.

"I know we [WRU] made Leigh Halfpenny a fantastic offer but if somebody comes in and offers him double the money he's being offered you've got to be realistic about those opportunities.

"Our ideal scenario is for them to play here [in Wales].

"If they're going to go anywhere I'd prefer them to go to France than across the [Severn] Bridge where the PRL impose IRB regulation 9, which does hinder some of the players.

"But it's a sign of the times and potentially it's only going to get worse as well."

Wales are bidding to be the first team to win three consecutive Six Nations Championships outright.

They start their campaign against Italy with seven of the squad of 23 based outside Wales.