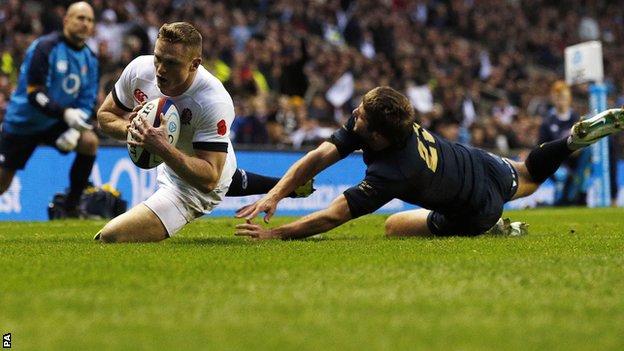 Wing Chris Ashton and scrum-half Ben Youngs have been left out of England's opening Six Nations match in France.

Uncapped Exeter wing Jack Nowell is in a 26-man squad along with Gloucester's Jonny May, who has one cap.

There are three other uncapped players - Luther Burrell, George Ford and Anthony Watson - in a squad that will be reduced to 23 for Saturday's match.

Ashton off the boil

Chris Ashton scored six tries in his first two Six Nations matches in 2011 but has managed just one in 13 games in the tournament since.

Danny Care and Lee Dickson are preferred to Youngs, who played for the British and Irish Lions last year.

Bath inside-centre Kyle Eastmond has dropped into the England Saxons squad to face Scotland A on Friday.

The omission of Ashton, 26, is the Saracens player's first from a major England Test since he burst on to the international scene in 2010 with nine tries in as many matches.

He is the leading try scorer in this season's Heineken Cup, but 20-year-old Nowell has impressed in Europe for the Chiefs and will vie for the two wing berths with May and Bath's Watson.

"We have been pleased with the form of Chris Ashton recently," said England head coach Stuart Lancaster.

"However, Jack Nowell has made great progress on the right wing and has also delivered in big games for Exeter Chiefs and we feel it is the right time to look at another option in that position.

"Chris remains an important member of the squad and I am sure he will be working hard to regain that position during the course of the Six Nations."

Lancaster said last week he was keen to test some of his younger players at international level and May, 23, is expected to start on the left wing in Paris.

Northampton's Dickson, 28, has nine caps and started England's previous Test against New Zealand in the autumn but Harlequins counterpart Care, 27, has recovered from injury and is likely to play at scrum-half.

"Competition at scrum-half has been particularly tight and Danny Care's form leading into the Six Nations has been excellent and he merits his inclusion," added Lancaster.

The jostling for position among England's backline contrasts with a relatively settled pack, where the only uncertainty is whether Mako Vunipola or Joe Marler will play at loose-head.

England's forwards were criticised after the 30-3 defeat by Wales in last year's Six Nations, but improved during the autumn internationals.

Back-rower Billy Vunipola told BBC Radio 5 live: "Hopefully as a forward pack we can keep moving forward and reach the goal of being the best in the world."