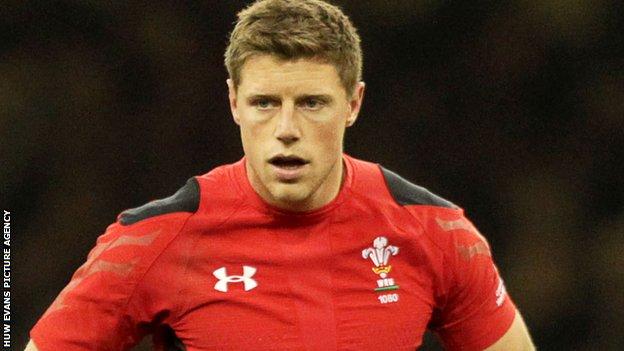 Priestland's contract with the Scarlets expires at the end of the season and he is among six players identified for central contracts and regional offers.

"It does worry you what's going to happen with your future," said the 27-year-old.

"I'm sure it's not just me who feels like that. I've been agitated easily and it's not the sort of person I am."

He continued: "I've found it difficult because I don't know all the facts and it's very hard to make a fully informed decision that way."

The sooner I can sort this out, the better for me and everyone else who is trying to sort things out. I think they all feel the same

Players are uncertain over what competitions they will be competing in next season, with a rival European competition to the Heineken Cup on the table and the possibility of the Welsh regions also playing in an Anglo-Welsh competition instead of the Pro12.

There is a bitter disagreement between the WRU and the four Welsh regions over that issue, with a new participation agreement going unsigned and a continuing dispute over how the game in Wales is run.

On Friday, Cardiff Blues chairman Peter Thomas claimed the regions and WRU were in a "crazy" competition for players.

Scarlets say they have offered Priestland and team-mate and fellow Wales international Scott Williams new contracts to stay with the region.

A central contract with the Welsh Rugby Union could also be an option after Lions captain Sam Warburton became the first player to sign such a deal in Wales.

However Alun Wyn Jones opted to re-sign with the Ospreys rather than take up a WRU contract.

Priestland has also been linked with teams outside Wales including English Premiership clubs Wasps, Leicester and Gloucester.

Wales team-mate Leigh Halfpenny became the latest player to join Welsh rugby's exodus after confirming he will leave Cardiff Blues for Toulon in the summer.

Priestland has been selected at fly-half for Wales' opening match of the Six Nations against Italy in Cardiff on Saturday and says his focus will be on the tournament.

"I've got this to concentrate on now with the Six Nations - I'm sure that will take my mind off other things," Priestland added.

"But hopefully in the meantime everything will become clearer one way or another and I'll be able to make a fully informed decision.

"The sooner I can sort this out, the better for me and everyone else who is trying to sort things out. I think they all feel the same.

"Alun and Sam, they all feel the weight off their shoulders now that they know what they are doing. Hopefully the sooner I can make a decision, the better.

"I'd like to see how things pan out. There's a lot of uncertainties with signing both contracts at the moment."