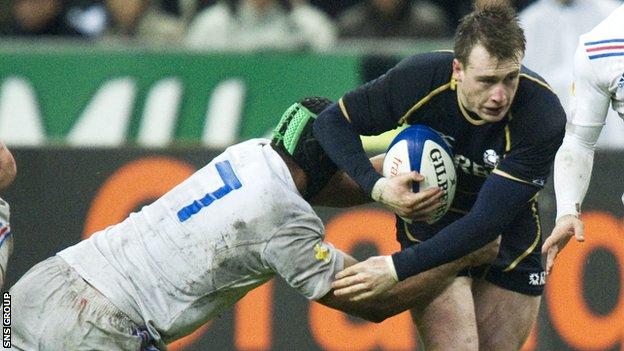 Hogg returns at full-back after missing the autumn Tests through injury, while Alex Dunbar is preferred to Nick De Luca at centre for Sunday's game.

Sean Maitland moves to the wing to accommodate Hogg at number 15.

Like something in my wine cabinet, Sean Lamont's certainly getting better with age

Dunbar, Swinson, Wilson and inside centre Duncan Taylor will be making their first starts in the Six Nations.

"We think it will be a fast game and we think we have the legs to carry it off.

"We've gone with form, although one or two players we would've liked to have had weren't available.

"The forwards especially were a hard pick, but we're happy. We believe we've got a good combination to go in against formidable opposition."

Duncan Weir starts at fly-half, but Warriors team-mate and fellow number 10 Ruaridh Jackson has been left out completely.

"When I first saw him, Duncan was a short little fat kid, but to be fair he's physically changed and looks dramatically different," said Johnson.

"He has a natural kicker of the ball and he's developed into a genuine threat.

"Both of them have got to solidify their spot at Glasgow too, but we think Duncan's skill set suits what we're trying to achieve in this game against Ireland more than Jacko.

"And I didn't want someone on the bench who could only play one position.

"Jacko has had knocks in his career before but always comes back - and he'll do so again."

Johnson is relishing the prospect of seeing Hogg, Maitland and Dunbar in action.

"We can go the length with that back three," he said.

"For a seasoned campaigner, Sean Lamont has some legs still. His form over the last 24 months for us has been outstanding, especially his work off the ball.

"Like something in my wine cabinet, he's certainly getting better with age."

as the Saracens forward wins his 61st cap.

A dead leg ruled out Glasgow wing Tommy Seymour, while Bristol forward Ross Rennie is not deemed fit enough to be part of the squad.

Edinburgh centre Matt Scott has overcome a hand injury to return to action, but starts on the bench.