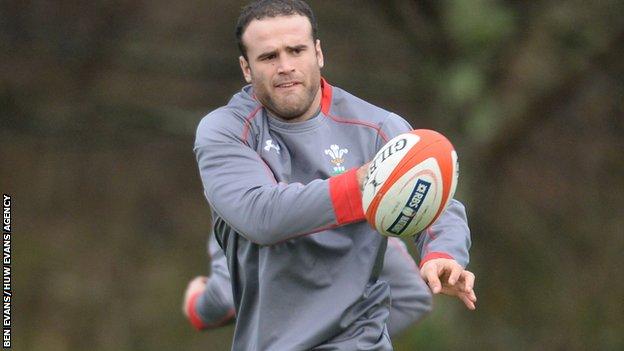 Jamie Roberts wants Wales to express their champion credentials when they open the defence of their Six Nations title against Italy on Saturday.

They also head into Saturday as the bookmakers' tournament favourites.

"We have to go out in our first game and express ourselves like champions," said Roberts, the British and Irish Lions centre.

Roberts, who returns to international action after missing the autumn series through injury: "[Wales coach] Warren [Gatland] has spoken about having a little bit of a strut in our stride and really being quite confident.

"We need to be honest and humble as well, but we have to go out and express ourselves.

"We can't go into our shells on the pitch, we have to go out and walk the walk because ultimately that has served us well over the last few years.

"We are a well-oiled machine, especially after the last two campaigns, and we know if we get all our big players fit and firing we are a very dangerous outfit."

But Racing Metro centre Roberts is also warning that Wales, who are going for an unprecedented third straight Six Nations title, have to be wary that the other five teams will be gunning or them.

"We know we are the team to beat and we have to adapt accordingly. That takes a lot of resilience, a lot of thinking and planning before games.

"It's important we do our homework and no stone left unturned going into Italy. We have worked very hard in the last couple of weeks."

Roberts' powerful midfield presence has served Wales well throughout a Test career that has seen him collect more than 50 caps.

He will partner in-form Scarlets centre Scott Williams against Italy, with Roberts' Lions colleague Jonathan Davies close to recovering from a chest muscle injury that ended his autumn campaign just 12 minutes in to the the opening fixture against South Africa.

"It was nice to be able to play in a big game leading into the Six Nations," he said.

"Being able to play in the Stade de France in front of 40,000 people and beat Toulouse quite convincingly was nice."