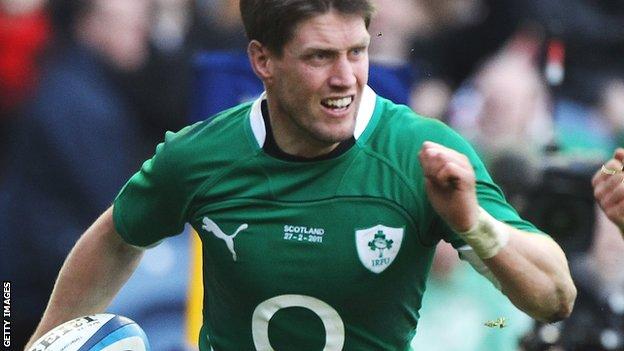 The inaugural Six Nations Championship of 2000 will always carry a special resonance for Irish rugby supporters.

On the surface it appears relatively unremarkable; a third-placed finish behind England and France, with three wins and two losses from their five matches.

But of greater significance were the Championship bows of two Irish icons who were to have seismic impacts in the green jersey over the course of the next decade and beyond.

The first was a Clontarf-born 21-year-old called Brian O'Driscoll, soon to announce himself to the wider rugby world with a stunning hat-trick in Paris as Ireland won in the French capital for the first time in 28 years.

The other was a 22-year-old from Cork, Ronan O'Gara, one of five debutants and eight changes in the side that faced Scotland - after a 50-point opening-day hammering at Twickenham - on 19 February 2000.

A transformative 44-22 victory that day kick-started an upturn in Irish fortunes that yielded only one finish outside the top three of the Six Nations in 13 years.

The forthcoming Championship will be the first in the 15 years since Five became Six not to feature O'Gara, who after 128 Ireland caps, a record 557 Six Nations' points, Triple Crowns in 2004, 2006 and 2007 and a Grand Slam in 2009, retired at the end of last season to take up a coaching role at French Top 14 outfit Racing Metro.

With O'Driscoll preparing for his Six Nations swansong, the end-of-era feel around Ireland rugby is only set to gather pace over the next two months. O'Gara will certainly have mixed emotions this weekend.

"I must admit it was very strange going back to Lansdowne Road for the Australia game in the autumn," O'Gara told BBC Sport. "It just felt so different, I had to hold myself back from warming up. It's amazing how robotic you become when you're nearly institutionalised for 15 years.

"There is something special about the Six Nations. It's a great competition that challenges you in every environment. But I've made the adaption now and I'm fully aware of where I am."

Where he is, Paris, is proving far from easy, with Racing fitful in the French league and bombing out of Europe before the knock-out stages, despite some heavy recruitment which included the arrivals of four British and Irish Lions in Jonny Sexton, Jamie Roberts, Dan Lydiate and Mike Phillips.

"An awful lot of people want it to fail because of the idea of buying a team, and you have to agree with that to a certain point, but when you're involved in it you have to make the best of the challenge going forward, and it's something I'm excited to do," O'Gara says.

"It's far more difficult than I thought it would be, but it's great for me, and hopefully it's something I can get the better of. I'm in at the deep end, and it will take a bit of time. But life is about challenging yourself."

Challenges are what faced O'Gara throughout his playing career. After battling with David Humphreys for the Ireland number 10 jersey for the first four years of his Test career, the Munster legend enjoyed six years of undisputed number one status through the remainder of the Noughties before the emergence in 2009 of Leinster's young outside-half Jonathan Sexton.

In November that year, months after helping to clinch Ireland's historic Grand Slam, O'Gara was dropped by coach Declan Kidney.

It was the start of another tug-of-war for the Ireland fly-half position that lasted until O'Gara's retirement last year, with neither player prepared to play second fiddle without a fight. By a strange quirk of fate, the two former rivals are now close confidantes at Racing, after Sexton's move from Dublin over the summer.

"It was hugely competitive, and a very strained relationship at the beginning, because I was looking to play on for as long as I could as the number one in Ireland, while Jonny was looking to launch his international career," said O'Gara.

"Two into one doesn't go and naturally there was friction there. It was very competitive, and it was heated plenty of times."

Now they work closely together, with O'Gara overseeing Racing's defence and kicking, amongst his other coaching duties.

"I do spend a lot of time with him. He certainly needs me over there (in Paris), and I need him, because we are outsiders. I'm sure he'd obviously like to be playing with Leinster in an ideal world, but he's made his decision and I think he's in good spirits with Racing."

Sexton, having come through a searching physical examination playing for Racing against Toulouse last Saturday, will spearhead Ireland's Six Nations campaign, with the old warrior O'Driscoll alongside him in the midfield.

The explosive pace of 2000 may have naturally waned with the passing of time, but at 35 O'Driscoll remains a totemic figure in Irish rugby, and still hugely influential.

"He is still going strong, still as hungry as ever, still giving out to people and driving the standards in training," said his fellow veteran Paul O'Connell, who will captain Ireland this year. "Things are done a bit differently when Brian is around. The standards tend to be a bit higher."

O'Gara is also more than happy to acknowledge the impact of his long-time team-mate and friend on Ireland's rugby fortunes.

"I suppose Brian has been Ireland's best player ever, which is a massive, massive statement. He's transformed the game, and made the game hugely popular. He's obviously a special player, but he's more a special person. We had great craic together. Great, great craic.

"Above all, he's a great ambassador for Ireland and a great person. Full stop."

"There are huge grounds for optimism for Ireland going forward. They have a coach all the players are ecstatic about. There is a favourable World Cup draw [with Six Nations rivals France and Italy in their group] there as well, so there's so much to play for."

After 16 years at the top of the professional game, O'Gara could have been forgiven for kicking back in retirement. But having relinquished the comforts of home for a rugby culture he admits "couldn't be more different" from Munster in his first coaching role, it's clear the fierce ambition that fuelled his playing career still burns.

Could that path eventually lead back to Limerick, and maybe even the Irish national team? "Could well be," he says with a smile. "Could well be."

Listen to the interview with Ronan O'Gara and a full Six Nations preview on 5 live rugby on Thursday, 30 January from 1930 GMT