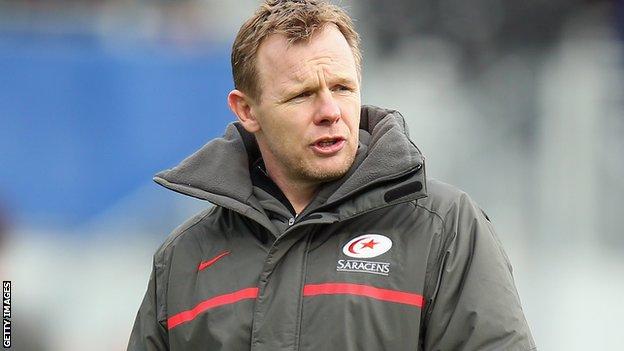 Saracens director of rugby Mark McCall and seven of his backroom staff have signed new contracts until June 2017.

The 46-year-old took charge midway through the 2010-11 campaign and led the side to the title in that season.

I believe we have assembled an outstanding group of people, on and offer the field

"I believe we have assembled an outstanding group of people, on and offer the field," Saracens chairman Nigel Wray said.

"They are intelligent, hard-working and absolutely dedicated to the challenge of maintaining our progress in recent seasons.

"We are delighted they are all so eager to guide the club through the years ahead."

McCall, whose previous contract ran until 2015, joined Saracens as first-team coach in 2009, working under Brendon Venter.

The former Ireland international and was promoted to director of rugby after the South African took on a technical director role in January 2011.

The club have finished top of the Premiership twice under McCall and currently lead the table.

They were beaten Heineken Cup semi-finalists in 2011 and 2013 and have reached the quarter-final stage of this season's competition.

McCall began his coaching career with Ireland U21s and Ireland A and was assistant coach at Ulster for two years before becoming head coach in 2004, a position he held for three years.

He spent time on the coaching staff at French side Castres before moving to Saracens.