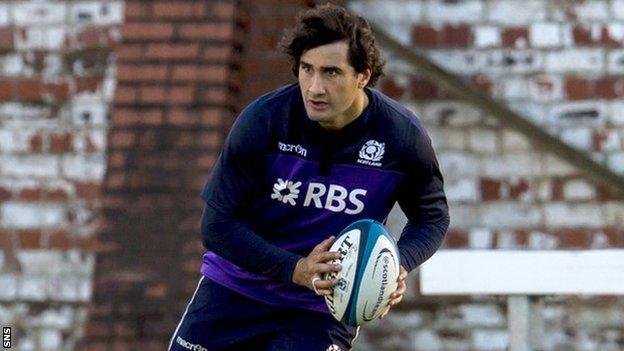 Six players will make their Scotland A debut as they aim to record a third straight win over England Saxons at Scotstoun Stadium on Friday.

And Olly Atkins, Kevin Bryce, Tyrone Holmes and Grayson Hart could all debut from the bench.

There are eight players from Glasgow Warriors, three from Edinburgh Rugby and four Exiles.

Allister Hogg has been playing very well for Newcastle Falcons, so he'll also be a key player for us on Friday

The 31-year-old Allister Hogg, who made his Scotland A debut against Romania in 2002, starts at number eight and will feature in a blue jersey for the first time since 2009, when he represented the full Scotland team.

Scotland A defeated Saxons 13-9 in Newcastle last year, 12 months after running in four tries to beat the Saxons 35-0 at Galashiels.

But head coach Shade Munro said: "We know how difficult the game is going to be and we'll need to be at our best to get a positive result.

"The players have one game to show what they can do before the RBS 6 Nations gets underway and it's a chance for them to showcase their skills in terms of promoting themselves to the national team."

Glasgow forward Gray, who has already played for the full international side, will captain the side despite still being in his teens.

"It's fantastic for Jonny Gray to captain the side. He's only 19 and he's captaining a senior Scottish national team," added Munro.

"He has played particularly well this season and deserves all the accolades given to him.

"Allister Hogg has been playing very well for Newcastle Falcons, so he'll also be a key player for us on Friday.

"There is a great mix of youth and experience within our squad and it's really encouraging to see so many young players coming through and getting the opportunity."