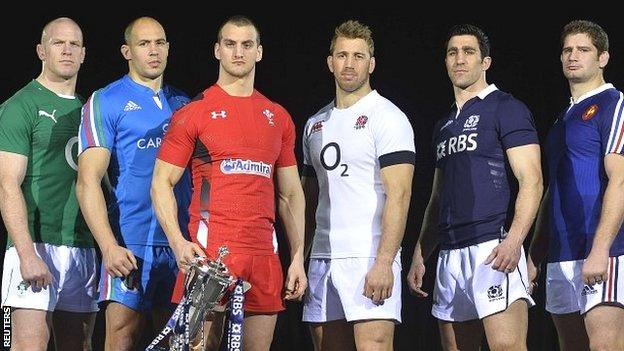 Can Wales win a historic third successive Six Nations title? Will England's emerging young side go one better than the last two years and lay down a marker ahead of a World Cup on home soil next year?

Could Ireland give Brian O'Driscoll, the top try-scorer in Six Nations history, a victorious farewell in what is expected to be his final campaign before retirement?

Or will France, who finished bottom for the first time last year, continue the trend that has seen them win the title in all four seasons that have followed a British and Irish Lions tour in the professional era?

Can Scotland and Italy build on winning two matches apiece last year, or will they revert to their traditional status as Wooden Spoon contenders?

The 15th year of the Championship, since the Five Nations became Six, promises to be as fiercely contested as any, bursting with power, passion, tradition and tribal confrontations.

Did you know? England have scored 200 tries in Six Nations history, 25 more than second-placed France. But last year they only managed five, their lowest tally in the tournament.

They say: "I don't rank us alongside Wales or Ireland or anybody else. I focus all my energy on how we are going to beat France. They will be highly motivated, as will Scotland the following week. I think it's hard to say who are favourites this year." (Head coach Stuart Lancaster)

Pundit's verdict: "It will be hard for England with only two home games, and starting with two away matches. But they have finished second in the last two Six Nations with a lot of this squad, and that will give them the belief they can go on and win it this year. So much rides on the first game as always, but Wales proved last season you can still win the tournament even if you lose your first match. I think England will finish in the top two again." (Former England centre Jeremy Guscott)

Did you know? France have used more players - 149 - in Six Nations history than any other team. But they have employed less coaches - three - than anyone else, and won the most titles - five.

They say: "I think Wales and England are the two favourites, and we are one of the outsiders. But French rugby likes to be the outsider. I believe in this young squad and I am sure we will be much more competitive than last year." (Head coach Philippe Saint-Andre)

Pundit's verdict: "There is nothing about this France side that makes me think they are going to cruise to the title in the way they have done after previous Lions tours. Their half-backs are unsettled and they haven't got a top-class kicker. If they lose the first game against England, they will be thinking 'here we go again' after last year's dismal effort. But their pack can be a match for anyone, and if the backs get good ball, they have enough talent to score tries. In Wesley Fofana, France have a genuinely gifted player who has a brilliant feel to his game, and the bit of magic you need." (Former England centre Jeremy Guscott)

They say: "If we can defend the Aviva [win our home games] and manage to win an away game against England or France, that would put us in the mix and give us a chance of being in the top two. I think that would be a fantastic achievement from where we have come from, even just winning our three home games, especially against Wales after a six-day turnaround; that is a really big ask." (Head coach Joe Schmidt)

Pundit's verdict: "I think Ireland will do pretty well. Although they ended up losing to New Zealand in the autumn, there was plenty of evidence of how Joe Schmidt wants them to play in the way they took the game to the All Blacks. This will be the last fling for some of Ireland's greats, so they will not lack for motivation. With three home games, and two to begin with, Ireland can build momentum and if they can stay injury free, I can see them finishing first or second." (Former Ireland hooker Keith Wood)

Did you know? Italy have finished with the Wooden Spoon nine times in 14 years. Last year they equalled their best ever finish of fourth, matching 2007, the only other year they won more than one game.

They say: "We didn't play good rugby in the summer or autumn, so our ambition is to get back to the same level we had in last year's Six Nations. I don't know if that will be good enough for one, two, three wins but the main thing is to get our consistency of performance back. We know we can't expect to win matches playing at 90%. Maybe at 100% we have a chance."(Captain Sergio Parisse)

Pundit's verdict: "It will be be an uphill battle with three away games. Italy also have England, who they have never beaten, at home so that would suggest at least four losses. But they face Scotland at home, so stand a chance of avoiding the Wooden Spoon. Scotland have only won two of their last 27 Six Nations away matches, and have lost on their last three visits to Rome." (Former England centre Jeremy Guscott)

Did you know? Scotland have never reached double figures for tries in a single Six Nations campaign. Their best was nine in 2000. But last year they accumulated their highest points tally - 98.

They say: "In parts of our game we can beat anyone but we need that on a more consistent basis. If we are still in the game after 60 minutes and can build scoreboard pressure, I think we are not far from a couple of big scalps."(Head coach Scott Johnson)

Pundit's verdict: "Scotland can be competitive in every match which gives them a chance but they cannot afford any injuries to key players as there is not huge depth in certain positions. Winning possession has not been a problem of late; it is what they do with it that has let them down. But I am encouraged with a backline that includes Alex Dunbar, Sean Lamont, Sean Maitland and Stuart Hogg, with Matt Scott still to come back in. Get the ball to those players in the right areas and Scotland could start scoring tries which has been a major problem recently. It is a tough start with Ireland away followed by England at Murrayfield. But Scotland will be aiming to win one of those games to set them up for the rest of the Championship." (Former Scotland captain Andy Nicol)

Did you know? Wales conceded only two tries on route to their 2008 Grand Slam success, the lowest total in a Six Nations campaign. They conceded three in each of their past two title-winning seasons.

They say: "We have already achieved a lot but we are not satisfied with that. Hopefully we can go through a period of real sustained success. When I first arrived a lot of these players had the success of the 1970s teams rammed down their throats. But these players can potentially leave a legacy behind of their own."(Head coach Warren Gatland)

Pundit's verdict: "I think Wales will go well. They start favourites on the back of last year's performances and have three games at home. But their second game in Ireland is crucial. If they win in Dublin that will give them momentum. But if Wales get injuries in the first two games that could be a problem because they haven't got the strength in depth in some positions. Wing George North has been the stand-out player this season; he is coming of age and his form coming into it is good. Number eight Taulupe Faletau is brilliant too. (Former Wales fly-half Jonathan Davies)