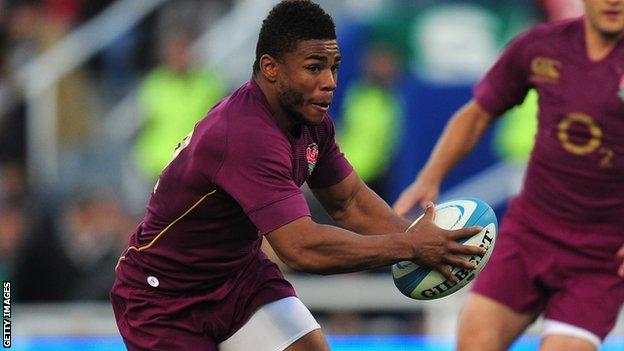 Bath's Kyle Eastmond and Semesa Rokoduguni will make their England Saxons debuts against Scotland A in Glasgow on Friday.

Centre Eastmond, who has two senior caps, and winger Rokoduguni start in midfield along with fellow newcomers Adam Thompstone and Dan Robson.

All four were replacements in the 8-4 defeat by Ireland Wolfhounds.

Bath's Anthony Watson scored England's only try in Saturday's game, while Gloucester's Freddie Burns landed a penalty in the second half.

Joe Lydon, the RFU head of international player development, said: "We have an exciting young squad of real potential with new Saxons caps for Semesa Rokoduguni, Adam Thompstone and Dan Robson, all of whom continue to play consistently well for their respective clubs.

"We are under no illusion how tough it will be for us in Glasgow against Scotland A, who've done well against us at this level in recent years, but our players have a lot of talent, endeavour and a willingness to work for each other to build on their club form."