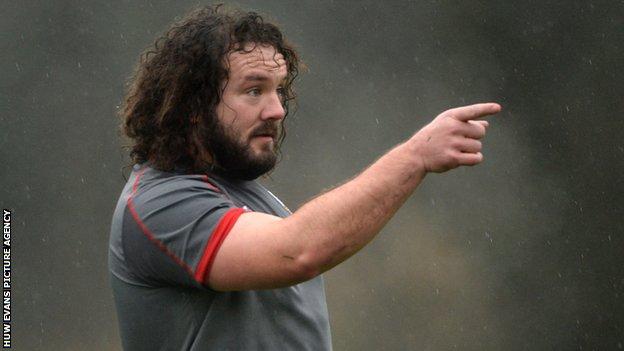 Adam's having a bit of pressure put on him and perhaps this will be good to motivate him, now he knows there's another couple of genuine characters there who will come in behind him

The Osprey, 32, who has won 89 caps for Wales and five for the British and Irish Lions, has been a cornerstone of the Wales pack since his debut in 2003.

Jones will again start in Saturday's Six Nations opener against Italy, with Rhodri Jones of the Scarlets providing tight-head cover from the bench.

"I had a bit of a chat to Adam Jones this week and said... 'you're coming under some pressure from some youngsters, whether it's Rhodri or Samson [Lee], because they're snapping at your heels'.

"I think that's healthy for a squad."

Jones admits that the new scrum laws introduced this season have affected his game, but feels he is getting to grips with the problem.

"As a pack in the Ospreys we've struggled and I'll put my hand up on occasions where the new scrum laws have caused me a few problems," Jones said.

"I guess I play my best rugby in the Welsh jersey and fitness-wise I'm feeling good.

"I know it's going to be a tough challenge with this Italian scrum. We know they're good, guys like Castro [Martin Castrogiovanni], these type of guys, but I'm looking forward to it now."

Jones will form the Wales front-row against the Azzurri in Cardiff alongside hooker Richard Hibbard and Paul James, who is selected at loose-head in Gethin Jenkins' absence.

Wales are seeking to become the first side to win the Six Nations title in three consecutive seasons, and after facing Italy face Ireland away, France at home and then travel to face England before rounding off their campaign in the Millennium Stadium against Scotland.