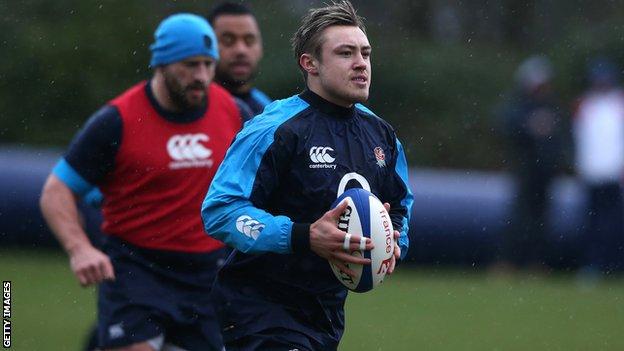 Jack Nowell's promotion to the England side to face France in the Six Nations is richly deserved, according to Exeter Chiefs assistant coach Ali Hepher.

The 20-year-old has been selected to make his debut in place of Chris Ashton at the Stade de France on Saturday.

"It's huge for the club and it shows how far we've come," Hepher told BBC South West Sport.

"But the most important thing is Jack's an absolute grafter. He works so hard and he's getting what he deserves."

Nowell, a member of the England Under-20 Junior World Cup-winning team last summer, has only played 29 times for Chiefs.

But his excellent displays in the Heineken Cup and the Premiership convinced England coach Stuart Lancaster to give him a chance on the right wing.

Cornwall-born Nowell has established himself as one of the most dangerous runners in the English game, while his defensive game has also been widely praised.

"He prepares meticulously for games and his performances in the Premiership and Europe have been right up there," said Hepher.

"Jack beats defenders regularly and he's one of the best in the Premiership at it. The club has given him the stage to show what he can do and he's taken the chance with both hands."

"It's fantastic first and foremost for Jack but also for the academy system and all the work that has gone into him," said Hepher.

"He's had a lot of assistance from coaches all along the way but it needs the drive from him primarily."

"It means a lot to us," the full-back added.

"Tom Johnson led the way really by getting capped and doing really well for England but everyone in the squad is happy to see their team-mates playing for England or at the highest level possible.

"I'm sure Jack will do well and we hope he gets a few tries and cements a place in the England set up."