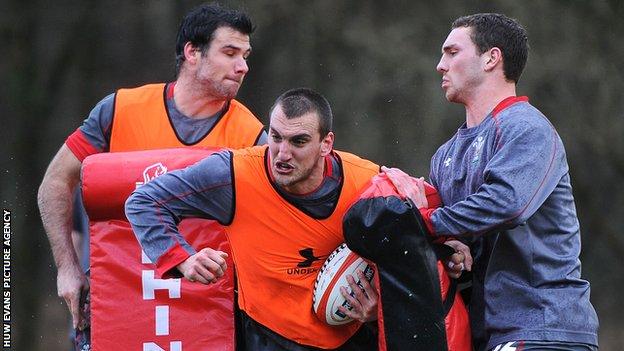 Sam Warburton's future has been thrown into doubt after he was warned he might not have a team to play for next term.

Warburton indicated he expected to continue playing for Cardiff Blues, but Regional Rugby Wales has made clear the regions' stance on central contracts.

It is important for the Welsh regions to stress that they have the utmost respect for Sam Warburton as a player, a leader, a young man of great integrity

"No agreement to play centrally contracted players in the regions currently exists," read a statement.

"The regions are concerned about the impact of this action, the confusion it creates within Welsh rugby at this time and how it may unsettle the balance of strong and close-knit team environments at the regions."

The WRU has been asked for a response to the latest statement from the regions, which comes three days before Wales begin the defence of their Six Nations title against Italy in Cardiff.

Warburton, who will start on the bench against the Azzurri as he returns from injury, was one of six leading Wales players coming to the end of their contracts with their regions at the end of this season who were understood to have been offered deals by the WRU.

The flanker's Blues team-mate Leigh Halfpenny has opted to join French club Toulon next season, while their fellow British and Irish Lions star Alun Wyn Jones has re-signed with his region, the Ospreys.

The Blues, Ospreys, Newport Gwent Dragons and Scarlets, represented by umbrella organisation Regional Rugby Wales, and the WRU are locked in a bitter row.

A new participation agreement has gone unsigned and the dispute over how the game in Wales is run continues.

Players are uncertain over what competitions they will be playing in next season, with a rival European competition to the Heineken Cup on the table and the possibility of the Welsh regions also playing in an Anglo-Welsh competition instead of the Pro12.

That saw Warburton opt for the security of a WRU contract, with the Blues unable to budget properly for next season and even having to delay putting season tickets on sale for the next campaign.

The Regional Rugby Wales statement said that there was no animosity towards Warburton, but stressed that their stance on fielding centrally contracted players had not changed.

"It is important for the Welsh regions to stress that they have the utmost respect for Sam Warburton as a player, a leader, a young man of great integrity and as an important role model for every young rugby player inside and outside Wales," read the statement.

"At the same time, the regions respect and support the right of Sam or any individual to make their own decision for their future based on their understanding of the choices available to them at any one time.

"The introduction of one individual national contract at this particular time, however, leaves the regions bemused and they would question the strategy behind the bizarre action by the WRU given that a final agreement on the future of Welsh rugby has yet to be reached.

"The regions would ask what kind of message this sends out about Welsh rugby to our colleagues in the game across the world.

"The regions would also question how one national contract works as a constructive and sustainable strategy for the whole of Welsh rugby given that we have some 200 professional players in Wales contracted to the regions."

In the statement, the regions did not oppose central contracts entirely, but said they needed to be part of a "collective agreement between all four regions - as part of a complete structural solution for the future of the game in Wales".

Blues chairman Peter Thomas has claimed the Welsh regions and WRU were in a "crazy" competition to sign Wales' top players.

Warburton's agent, Derwyn Jones, said the open-side flanker turned down a move to French club Toulon in order to stay in Wales, with the offer from the WRU the only viable solution.