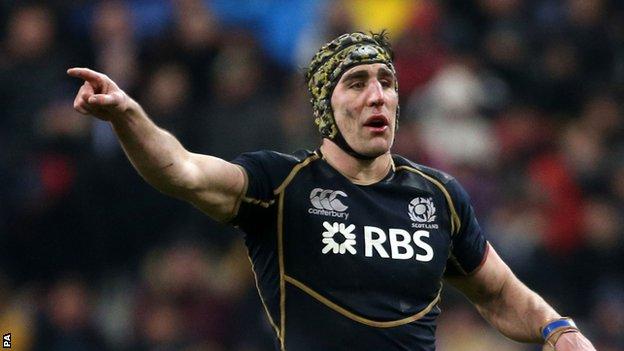 Scotland captain Kelly Brown expects Ireland to "come flying out of the blocks" in their Six Nations opener.

The Scots travel to Dublin on Sunday aiming to get their campaign off to a winning start.

"Any away game in the Six Nations will be hostile so we are expecting that but at the end of the day it is down to 15 against 15," Brown said.

"We have not won our first game for a number of years so if we can start well then we can build some momentum."

Saracens forward Brown, who will earn his 61st cap on Sunday, is under no illusions as to the threat posed by the Irish.

"It's an incredibly tough start," he said. "Their last match was against the All Blacks and they probably should have beaten them.

"We finished third last year, which was our highest finish in quite a number of years, as a squad we need to keep working hard.

"On top of that, it's about making sure we're more consistent because in the past we've maybe raised ourselves for one-off games but we have to make sure we do that time and again."

Stuart Hogg returns at full-back for Scotland having missed the autumn Tests through injury, while Alex Dunbar is preferred to Nick De Luca at centre.