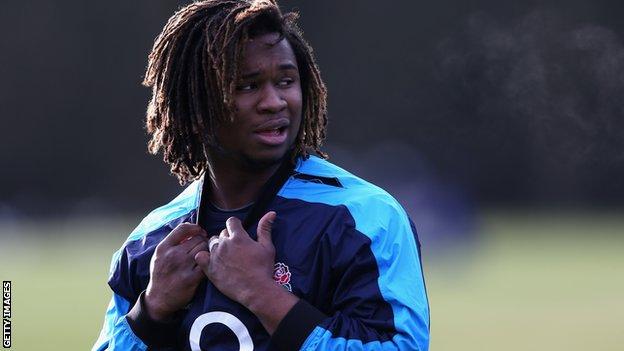 London Irish's England winger Marland Yarde has signed a two-year contract with Harlequins and will move to the Twickenham Stoop in the summer.

The 21-year-old came through the Exiles' youth academy and made his debut for the club in November 2010.

Yarde made his England debut during last summer's tour of Argentina and has won two international caps.

"I am excited to move on to the next stage of my career with Harlequins and hope to continue to develop," he said.

Yarde is currently sidelined with a ruptured tendon in his hip, ruling him out of the opening Six Nations fixtures.

The St Lucia-born player joined London Irish at the age of 14 and has scored 16 tries in 39 senior appearances for the club.

He has represented England at Under-16, Under-18 and Under-20 level and has scored two international tries, both on his Test debut against Argentina.

"I will always have fond memories of London Irish and can only thank the club for what they have done for me as a player to date and the opportunity they have given me," Yarde added.

"It's easily the hardest decision in my rugby career but I would like to thank everyone at the club who has helped me develop into the player I am today."

Irish director of rugby Brian Smith had hoped the arrival of new investors at the club in December would enable them to extend Yarde's stay at the Madejski Stadium.

"We did everything within our power to retain Marland, considering that the club had developed him as a player, progressing to being a valued member of the senior playing squad and ultimate achievement of international honours," a London Irish statement said.

"An offer of more than substantial new terms was made to Marland so, in the circumstances, the club is disappointed with his decision to move on.

"However, the club must also move on and proceed with our plans to build a team for the future."

"I know how much Marland appreciates everything that has been done for him by London Irish," O'Shea said. "However, once he decided that he wanted to make a change I think we both knew the fit was perfect.

"He is young, ambitious and has world-class potential. We are absolutely determined that we will help him realise his ambitions and look forward to him joining the squad for pre-season training in the summer."