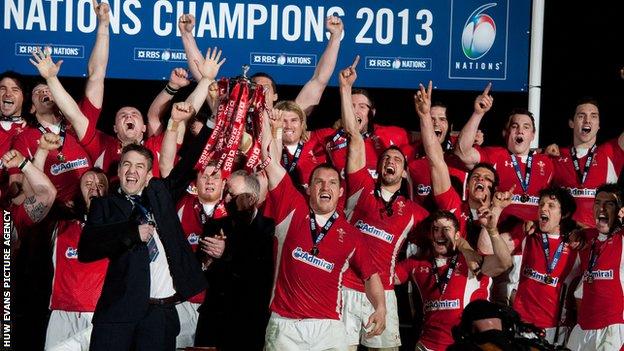 The Welsh Rugby Union (WRU) says it is willing to sign more players with a free loan back to their regions.

The WRU signed Wales captain Sam Warburton and has now asked the Scarlets and Ospreys to "conclude negotiations" with Scott Williams, Rhys Priestland and Adam Jones.

The regions threw doubt on Warburton's Blues future, saying there was no deal to field centrally-contracted players.

The WRU has urged the regions to offer their own contracts first.

But, it adds: "If any region cannot agree terms with a key international player the WRU will be prepared to negotiate a national contract with the individual in order to keep them in Wales as the WRU did with Sam Warburton.

"...The clear intention is to ensure the four regions have the opportunity of gathering the strongest squads possible to compete on domestic and European stages."

The WRU and the four regions - Cardiff Blues, Newport Gwent Dragons, the Ospreys and Scarlets - are embroiled in a bitter dispute over how the game is run in Wales; competitions and the exodus of players for higher salaries in England and France. A proposed legal agreement between both parties remains unsigned.

Warburton's central contract announcement on Saturday was followed by the regions issuing a statement on Wednesday saying: "No agreement to play centrally contracted players in the regions currently exists."

Warburton himself said in his Daily Telegraph column he had : "told the union I only wanted to sign a central contract if I could play for the Cardiff Blues."

The regions have not opposed central contracts entirely, but said they needed to be part of a "collective agreement between all four regions".

Blues chairman Peter Thomas had claimed on Friday the regions and WRU were in a "crazy" competition to sign Wales' top players.

Warburton was one of six leading Wales players coming to the end of their regional contracts who were understood to have been identified as candidates for central contracts.

The flanker's Blues team-mate Leigh Halfpenny has opted to join French club Toulon next season, while their fellow British and Irish Lions star Alun Wyn Jones has re-signed with his region, the Ospreys.

The Welsh Rugby Union is also offering to take a limited number of players off the regions' hands even if those players have already signed a contract with their region.

The offer would come only if the regions and union can agree to a new deal to set out how the professional game is run.