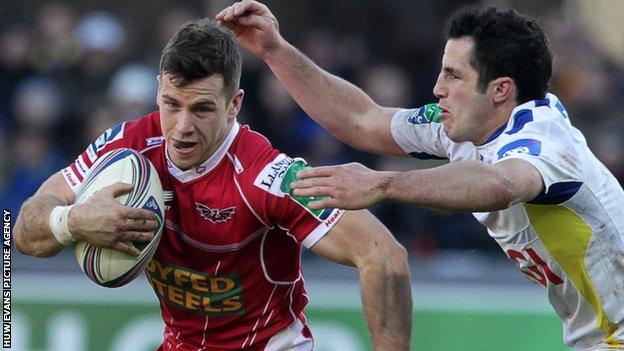 Scarlets scrum-half Gareth Davies has signed a contract extension at the Welsh region.

The 23-year-old from Newcastle Emlyn in Carmarthenshire, has come through the ranks at Parc-y-Scarlets.

Davies has impressed this season scoring six tries in 12 starts.

"It is good news for us as a region to have secured a quality player in the ascendancy of his career who has been developed from within our region," said Scarlets head coach Simon Easterby.

"He's an explosive and dynamic player with the ability to change games with his pace and power.

"As a nine, he's physically very strong and aggressive and works well with our forwards and has also shown his ability to finish well this season."

Scarlets captain Jonathan Davies joins French Top 14 side Clermont Auvergne at the end of the season.

Two of the region's other Welsh internationals Scott Williams and Rhys Priestland are out of contract in the summer.

Easterby says he hopes the deal to secure Davies' services is one of many to come.

"He is one of a number of quality players that we want to keep within our ranks to build on our strengths as a team with a strong, skilful and attacking back-line, boosted by the addition of players like Regan King who returns next season," added Easterby.

Davies, who made his first appearance for the Scarlets in 2009 as a replacement against Ulster, is delighted with the deal.

"I am thoroughly enjoying my rugby with the region I've grown up with," said Davies.

"There is plenty to come from this team in the future, we've shown what we can achieve as a team from our away wins in Europe this season against some big teams and there's a lot of commitment in this group to push on.

"Coming from this region, it means a lot to pull on the Scarlets jersey and my home community, family and friends are part of the Scarlets, so it's obviously the place I want to be, feel most comfortable within as I develop further as a player."