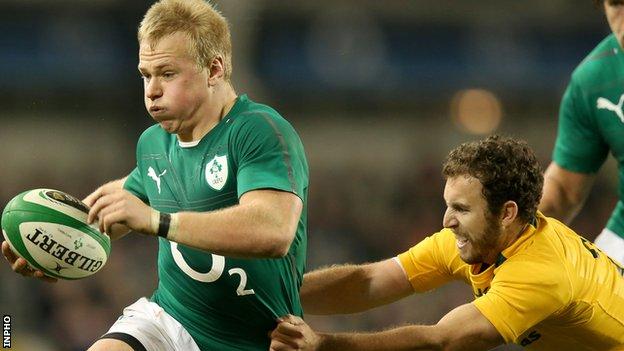 Ulster duo Andrew Trimble and Luke Marshall are surprise inclusions in the Ireland team for Sunday's Six Nations opener against Scotland in Dublin.

Two of the three changes from the New Zealand defeat are in the backs with Trimble replacing the injured Tommy Bowe and Marshall in for Gordon D'Arcy.

The other change from that match sees another Ulster player, Chris Henry, in for injured flanker Sean O'Brien.

O'Driscoll moves ahead of Ronan O'Gara's 128-cap haul while another milestone will see Rob Kearney making his 50th appearance for the Irish.

D'Arcy, 33, was one of Ireland's best performers against the All Blacks.

The 75-times capped Leinster centre's omission from the entire squad for this weekend's game will be a major talking-point although it's conceivable, given the physical demands of the competition, it may be a case of him being kept fresh for next weekend's game against Wales.

Ireland coach Joe Schmidt, facing into his first Six Nations in charge, said that it had been a "very, very close call" between his former Leinster player and four-times capped Marshall.

"I think part of it was that Gordon had a little bit of a stomach bug at the start of the week," added the Irish coach.

"Luke made a couple of really good telling breaks against the Australians in the autumn, then Gordon D'Arcy played as well as I've seen him against the All Blacks."

D'Arcy has partnered Brian O'Driscoll at centre for Ireland on an international record 52 occasions.

Marshall, 22, did start ahead of D'Arcy in the middle November Test against Australia but a defensive mix-up between him and Ian Madigan led to one of the opposition's tries.

The Ulster centre was then left out of the squad for the All Blacks game but he is back in favour for Sunday's Championship opener.

Schmidt indicated on Friday that Trimble's "physicality" had been a factor in the Ulster wing's recall given that Sean Lamont has been named in the Scotland line-up.

With Bowe and Keith Earls ruled out by injury and Luke Fitzgerald also not risked because of a hip niggle sustained in midweek, Trimble starts ahead of Fergus McFadden after missing out on all of last year's Six Nations.

"The one thing we felt with Luke (Fitzgerald) was that if we tried to push too hard this week we might lose him for more than next week anyway," added Schmidt.

Henry holds off the claims of Tommy O'Donnell to take the flanker berth left vacant by O'Brien's injury.

Scrum-half Boss is named in the squad after Eoin Reddan was ruled out by a calf injury.