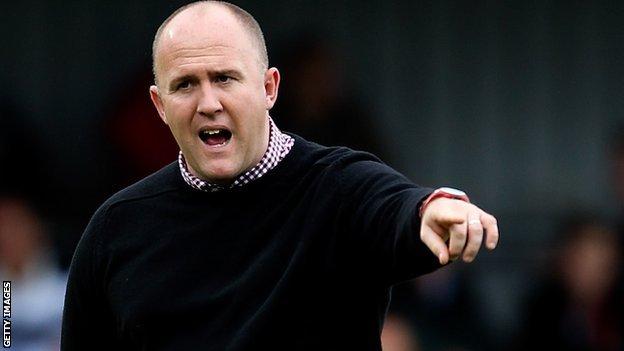 Cornish Pirates boss Ian Davies says his new deal with the Championship club allows him to "aim for the stars".

The 40-year-old has taken the role of director of rugby, with a release clause included allowing him to move to a Premiership club.

He has earned recognition from outside the club, leading an RFU Championship XV against the Maori All Blacks last term and has coached the Barbarians.

He joined the club as forwards coach in 2009 before stepping up to head coach following the departure of Chris Stirling in 2012.

"I'm still ambitious and trying to aim for the stars," he said.

Talking to BBC Radio Cornwall he added: "I'm very pleased that Dicky [Pirates owner Dicky Evans] offered me the post, but also it's very nice of him to put in a release clause if an Premiership club did come knocking on the door."

However, the Welshman insists his desire is to reach the top flight as the Pirates boss, having joined the club as forwards coach in 2009.

Davies said renewed plans for the long-awaited Stadium for Cornwall project has encouraged him further.

"We are building something - there is a good culture here and we are trying to push to get to the Premiership ourselves," he said.

"When I first came on board we had the three-year plan - the stadium was going to be built and we were putting a team together for the Premiership.

"The stadium then went off the radar and suddenly we took a dip, but we are back on course with the news a couple of weeks ago that the stadium could be be going ahead again."

Meanwhile, Davies is looking for a strong response from the sixth-placed Pirates against Championship bottom-side Ealing on Sunday after last week's 25-6 loss to London Scottish.

"We were so bad last week that I don't care about the result - I just want to see an improved performance," he said.