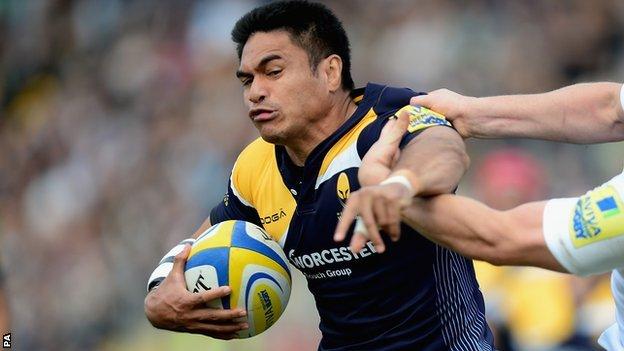 Worcester Warriors winger David Lemi is set to make his first appearance in three months as his side wrap up their LV= Cup pool games against Exeter.

The 31-year-old Samoan, who has been out since 1 November with a shoulder injury, has been named in a near full-strength Warriors side.

Skipper Jonathan Thomas also returns for his first game in over a month.

"A few guys are coming back. They are a bit miffed as they haven't played in recent weeks," said coach Dean Ryan.

"We know this weekend is a stepping stone into the Premiership and we'd like to do it with a winning performance to give us that confidence going forward.

"Hopefully we can get a lot of our guys out there and playing some rugby and come out without any bumps and bruises. I want every one of our top players fit and ready for selection next week which is most important."

The Warriors have only won two matches this season - at an under-strength Cardiff Blues in the LV= Cup before Christmas and the 20-13 win in their final Amlin Challenge Cup group game against Oyonnax at Sixways a fortnight ago.

Altogether, Ryan has made 11 changes from the team that lost 20-3 at Sale last weekend - their fourth defeat by the Sharks this season.

Any hopes Worcester had of finishing top of their group were ended last weekend, but Exeter can still qualify for the last four with victory at Sixways.

Sale's 36-35 defeat by Ospreys at Bridgend on Friday night has thrown the door open for the Chiefs to finish top of Pool 2.