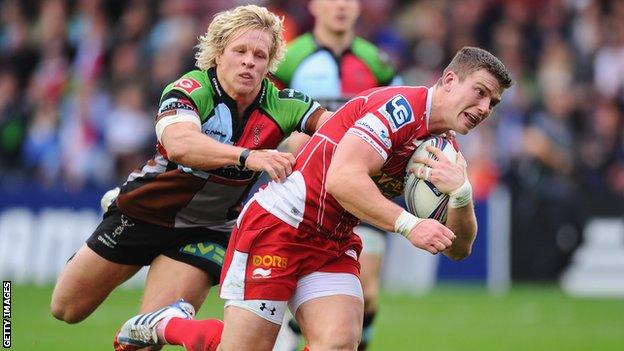 Wales centre Scott Williams has agreed a new two-year deal to keep him at Scarlets until the end of the 2015-16 season.

The 23-year-old had been linked with clubs outside of Wales and with a Welsh Rugby Union central contract.

But he had always stated his preference was to stay with the Scarlets.

"I'm really pleased to have secured my contract with the Scarlets going forward and to have committed my future to rugby in Wales," said Williams.

"It's really good to have this all secured now, so I can concentrate solely on my rugby and the campaign ahead of us, both with Wales in the Six Nations and then back to RaboDirect Pro12 league action with the Scarlets."

Given all the debate about retaining our best players in Wales, it's a real positive for Welsh rugby as a whole that one of our top internationals has chosen to stay here

"It's very significant and important to our region to have extended Scott's contract as a key player to build our squad around," said Easterby.

"Given all the debate about retaining our best players in Wales, it's a real positive for Welsh rugby as a whole that one of our top internationals has chosen to stay here.

"We're proud that someone of his ability, experience and with a genuine passion for our region has committed to remain with us in the seasons to come."

Williams's contract at Parc y Scarlets was due to expire in the summer, along with that of fly-half Rhys Priestland. The pair had been named as two of the six players identified for national contracts by the WRU.

Priestland has made it clear that he is feeling stressed by the speculation.

"It does worry you what's going to happen with your future," said the 27-year-old.

Williams is the second Welsh international to pledge his future to his region and reject the chance of a WRU national deal. Alun Wyn Jones re-signed with the Ospreys after rejecting a central contract.

"Scott is an exceptional talent, he has shown his maturity and skill now on the big stage," Easterby added.

"He thoroughly deserves the positive recognition and profile he has received as a player both for the Scarlets and Wales and there was a lot of demand and competition to secure him in contract."

Only Sam Warburton, the Wales captain, has signed a central contract with the governing body, while the future of Wales and British and Irish Lions prop Adam Jones is still unclear.

Wales and Lions full-back Leigh Halfpenny signed for French side Toulon on a two-year deal in January.

The WRU says it is "delighted" Williams is staying, adding it was prepared to negotiate national (or central) contracts with key players who have not agreed to sign with their regions.

"The priority for us all is to keep as many key players in Wales as possible as we all understand the pressure many of them have to move abroad," said WRU chief executive Roger Lewis.