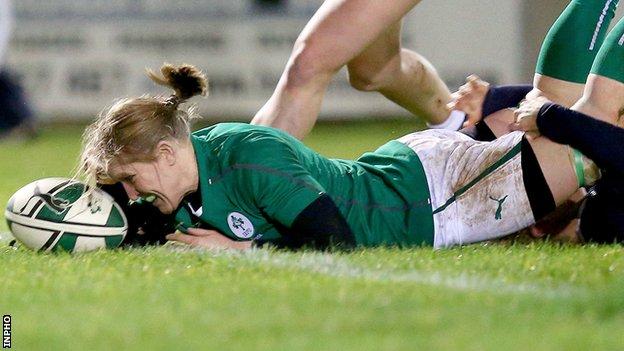 Ruthless Ireland hammered a youthful Scotland side 59-0 to make an awesome start to their defence of the Women's Six Nations Championship.

Second row Sophie Spence and winger Alison Miller scored two tries each with Heather O'Brien and Lynne Cantwell also touching down in the first half.

Spence, from South Shields, completed her hat-trick early in the second half.

Not having played a competitive fixture since completing the 2013 Grand Slam against Italy in March did not seem to bother Philip Doyle's team.

They had two tries in the bag inside the opening 10 minutes and that set the tone for the one-sided match at the Ashbourne ground in County Meath.

Lock forward Spence, who scored the first try in Ireland's historic Grand Slam last year, did it again by touching down in the corner following a short line-out.

Speedy wing Miller, who scored five tries in the 2013 championship, got off the mark in this campaign with the hosts' second try and and this time Norah Stapleton was successful with the conversion.

Ireland broke through the Scotland defence again in 20th minute and Highfield's Heather O'Brien got the try which made it 17-0 to the title holders and winger Miller showed her pace once more just a few minutes later for the fourth Irish try.

The Irish struck again when a pass by Ulster scrum-half Amy Davis found Richmond captain Cantwell whop went on to dot down.

The home pack's driving maul after a line-out saw Scotland marched back more than 20 yards with Spence getting the touchdown to leave it 32-0 at the break.

Spence scored again soon after the restart and Egan's try made it 42-0.

Ulster captain Kennedy took a pass at her bootlaces and managed to hold on to score with Jenny Murphy taking on the kicking duties to land the conversion.

Cantwell wriggled over for her second try of the evening and near the end Molloy scored a fine individual try.

Ireland will be back at Ashbourne for their next match as they host Wales on Friday, 7 February.