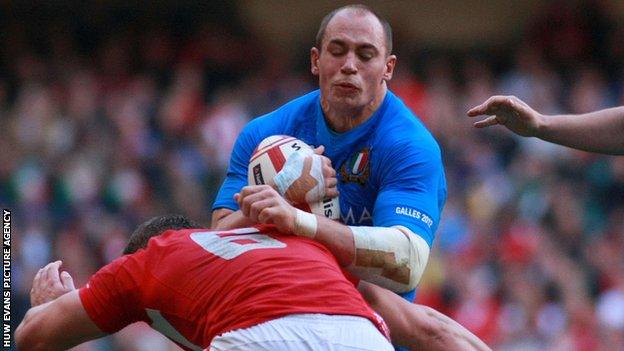 Italy captain Sergio Parisse says his side face one of the World's best back lines when they take on Wales on Saturday.

Despite the forecast for wet weather the Italians have decided to keep the Millennium Stadium roof closed for the match.

Back-rower Parisse says it is part of a change of approach by his usually forward focused side.

"We are going to play with our backs," said Parisse.

"That's what we are going to try to do and give confidence to our young players against a great Wales team."

Italy have never beaten Wales in Cardiff, but drew 18-18 against them at the Millennium Stadium in 2006.

Wales have won the last six matches between the two countries in the tournament and are going for a record three straight Six Nations titles.

Parisse expects a tough afternoon in Cardiff but is confident his side can do well.

"We know that we have a lot of young players playing for the first time in the Six Nations so it's a lot of pressure on them," said Parisse.

"We know that every time we move to play away against Wales or other teams they really put the focus on our forwards on our scrum and lineout.

"Playing at the Millennium Stadium is very difficult, it's the first match of the tournament so we know all the ambition of the Welsh team.

"We've worked well in these last two weeks. It's a really good test I think for our young players.

"It's a good opportunity to play against one of the best back lines in the World.

"But I'm very confident our young players are going to do everything to stop the Welsh backs."