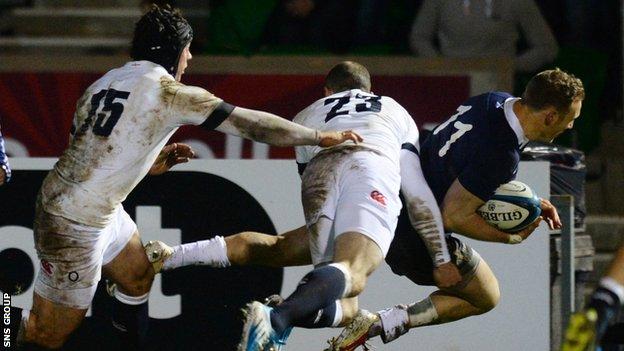 Scotland A coach Shade Munro was pleased with a 16-16 draw against England Saxons at Scotstoun Stadium.

A late penalty from Tom Heathcote levelled a scrappy game which had two visiting players sin-binned.

"Given we've only had one week's training, that was a good result for us," said Munro.

"To get a result out of that game, given that we seemed to have slipped permanently behind with 10 minutes to go, was pretty satisfactory."

"We knew it was going to be a tough game," he said. "They always are with that great rivalry when we face a Scotland team.

"I'm as disappointed as the players are not to have got a win, they have learned a lot about how to play international football - or in some cases not.

"To lose two players was crucial - little bits of ill-discipline at key moments in the game that could have cost us a lot more."

A late tackle gave England stand-off Freddie Burns the chance to put his side 3-0 ahead on three minutes.

Robson was sent to the sin bin by referee Laurent Cardonna for stamping as he followed up a half break from centre Elliot Daly that took him into the home 22.

Scotland then produced some pressure in the England half with their most coherent piece of play of the period bringing a straightforward penalty that Pyrgos struck over.

However, by the interval England were 10-6 ahead - and again an error opened the door.

Scotland full-back Jack Cuthbert, who had been a rock under England kicks allowed one to squirm from his grasp. The scrum brought an England penalty which was taken as another scrum to finally produce a penalty try, converted by Burns.

The second half saw England continue to monopolise territory through the slick kicking of Burns, who edged his side further ahead with a long straight penalty in the 46th minute.

But Burns had to hobble off soon after, replaced by Slade - and almost immediately he was sin-binned when caught offside.

The resultant penalty allowed Scotland to establish themselves in the England 22 from where the ball was spun to the left for winger Byron McGuigan to score in the corner. Replacement stand-off Tom Heathcote converted to tie the scores.

Daly put England ahead with a penalty in the 63rd minute but a second penalty from Heathcote again brought parity.