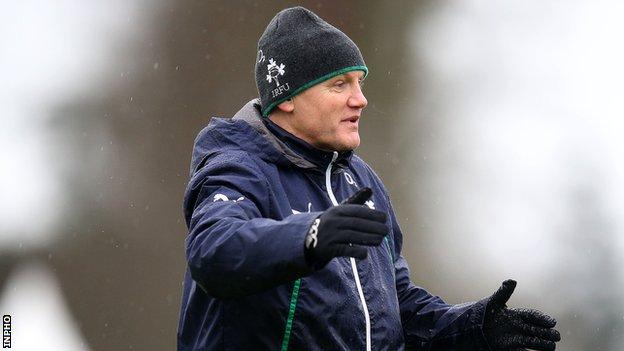 The Irish open their Six Nations campaign against Scotland on Sunday knowing the Lions flanker will play no part in this year's Championship.

"Sean's numbers were unbelievable both in defence and attack in the New Zealand defeat," said Schmidt.

"So everyone has to take on that responsibility against Scotland."

Ulster flanker Chris Henry starts at open-side, tasked with frustrating Scotland at the breakdown, but will face a huge test to match O'Brien's tireless ball-carrying exploits.

However, Schmidt says that his entire back-row and indeed pack will have to up their workloads to make up for the absence of the rampaging Carlow man.

"As long as it's shared, then that burden is lightened, rather than asking one person to pick up 10 of the carries Sean made, and someone else to make 10 more.

"He's a big loss and it's a huge opportunity for Chris Henry and the rest of the forward pack to take it on."

However after last year's disappointing fifth place in Declan Kidney's final campaign in charge, the Irish squad are not making any bold pronouncements.

"I think this squad is every bit as good and possibly better than 2009 but until we go on and do something you can't say that," said O'Connell.

"We've got a great amount of talent and experience.

"You look at Johnny Sexton and Brian O'Driscoll either side of Luke Marshall, they are three outstanding players.

"And there's two guys with so much experience to guide Luke along."

The 22-year-old is likely to be sent into second-half action from his seat on the bench, and boss Schmidt expects a big impact.

Though Schmidt concedes Ireland are thin on the ground on the prop front, he does anticipate Moore reaching the game's pinnacle.

"We just felt that Marty deserved the chance," added Schmidt.

"With John Afoa, Nathan White and BJ Botha playing in the various provinces there's not a massive amount of depth to go to.

"At the same time I've no doubt Marty won't let us down."