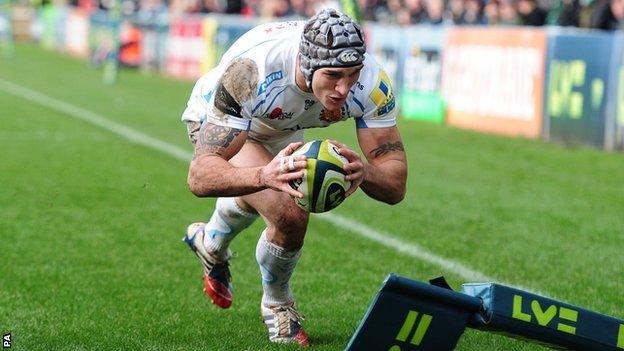 Exeter Chiefs booked their place in the semi-finals of the LV= Cup with a five-try slaughter of woeful Worcester Warriors at Sixways.

The Chiefs put 40 points on Worcester for the second time this season as they romped to a bonus-point victory.

Chris Pennell's penalty was Worcester's only reply to first-half tries from Tom James and Gareth Steenson, whose kicks earned an individual 22-point haul.

But their haul of 14 points was only enough to earn an away tie in the last four against Bath, although with the incentive of knowing that, if they win at The Rec, they will then be hosting the final at Sandy Park on 16 March.

"We must not look to far ahead but it would be amazing for our supporters to have a final on their own patch," said forwards coach Rob Hunter.

"It was important that we got a number of our players back in action and, after good wins at the Blues and against the Ospreys, this will give us confidence going back into the Premiership.

"It was a good tough work-out for us with a hard game against Northampton next Saturday. Our defence was strong and our set-pieces went well."

Worcester's heaviest defeat of the season was their 19th loss in 22 competitive outings this season under Dean Ryan.

"It's very difficult to understand what happened as we'd worked hard all week," said skipper Jonathan Thomas, returning after a month out.

"As a pack, we've played well over the last five or six weeks, but it's so frustrating when we put in a performance like that.

"We need to get some pride back in the shirt," he told BBC Hereford & Worcester.

Any hopes Worcester had of finishing top of their group were ended last weekend, but Sale's 36-35 defeat by Ospreys at Bridgend on Friday night had thrown the door open for the Chiefs to finish top of Pool Two - and they strode through it.

"I understand that this game didn't have anything on it," added Warriors director of rugby Dean Ryan. "But it was still very disappointing for everyone involved. We just got bullied.

"Exeter do it simple, powerful and aggressive. Nothing flash. They just did the basics, but we lost the physical contest."

Ryan made 11 changes from the team that lost 20-3 at Sale last weekend - their fourth defeat by the Sharks this season.

Worcester winger David Lemi made his first appearance in three months, having been out since 1 November with a shoulder injury, but it made little difference as Worcester were outbattled and outclassed.

And Worcester now go into next Friday night's home game against champions Leicester a dispirited bunch.

"I was looking for a springboard going into that game, but it wasn't to be," added Ryan.

"It's a six-day turnaround and we're fighting for our lives. If we play like that I am pretty sure what the outcome will be."