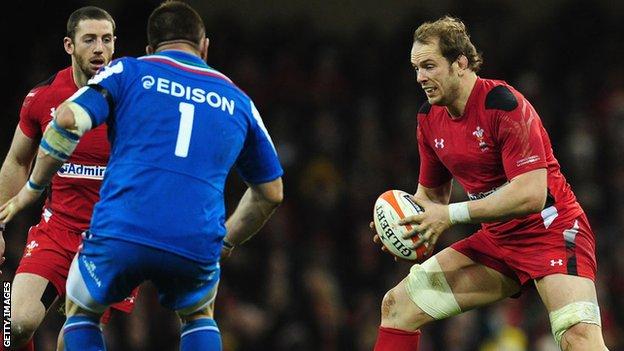 Wales captain Alun Wyn Jones was happy with a win against Italy, but felt his team had been a "bit soft" in attack.

Defending champions Wales held on for a 23-15 win in the opening game of the Six Nations Championship Cardiff.

Wales led 17-3 at half-time, but were pegged back by a lively Italian team and needed a late Leigh Halfpenny penalty to see them home.

"I don't think relief is the word, I think it was a good test for us to start with," said Jones.

"It probably looked worse than it actually felt on the park.

"We seemed to spend a lot of time around the fringes of their 22 ... and we probably squandered it [possession] and were a bit soft."

Wales are aiming to win a third successive title, but face a tough test in Ireland in their second match on Saturday, 8 February.

Jones, who was given the captaincy with usual skipper Sam Warburton starting on the bench, claimed a lot of Welsh mistakes were borne out of their ambition to play open rugby.

"A willingness to play with ambition comes with mistakes," he said.

"Ultimately we started to come back into the game but we couldn't keep the tempo up, particularly at set-piece time for certain reasons.

"We were looking to play and use the ball - thing we've been criticised on in the past - with that comes mistakes but we got the win.

"But we need to hold on to the ball when we get into those [attacking] areas.

"In the past we've seemed to get more points the more phases we go through and we really don't want to put ourselves under pressure at those times."