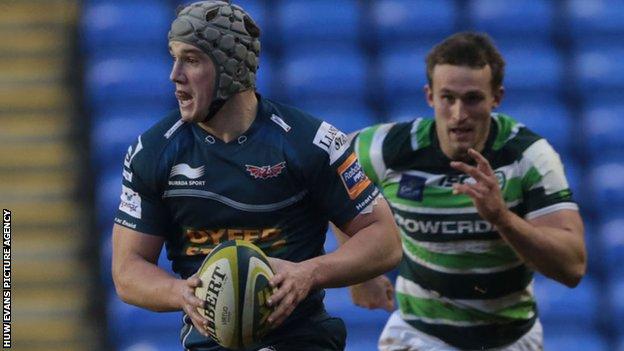 Jonathan Davies has returned to the Wales squad and will be available for selection for Saturday's Six Nations game against Ireland.

The British and Irish Lions centre played 40 minutes for Scarlets against London Irish on Saturday.

Davies was making his first appearance since tearing a pectoral muscle against South Africa in November.

Jamie Roberts and Scott Williams started at centre in Wales' but Davies is in contention.

Davies and Roberts lined up for the 2013 British and Irish Lions in their decisive third Test win over Australia to clinch the series.

Former Wales captain Gareth Thomas has in the Wales midfield against Ireland, although Williams scored a try and made another against Italy in Cardiff.

"He has been out for such a long time [and was] a little bit rusty, but it was a good hit-out for him," Easterby said.

Davies was unexpectedly named in the Wales squad for the Six Nations championship in spite of initial medical reports suggesting he would be out of action until early March, but he has made a quicker than expected return to fitness.

The centre - who played in all three Lions Tests against Australia in 2013 - has world-class credentials and has also scored three tries in four appearances against Ireland.

"It was always our intention to give him 40 or 50 minutes," added Easterby.

"It looked like he was fatiguing a little bit, but he was pretty happy with the work he got through.

"It certainly wasn't a game where you could hold back. It was full-on, and they (Irish) were pretty physical.

"Whether he will be involved with the Wales team next weekend is down to him and down to our medical team and their medical team to see exactly where he is at in terms of his return to playing."

The match in Dublin is regarded as pivotal to Wales' chances of becoming the first team to win three consecutive Six Nations titles.

The match is likely to be proceeded by further questions about Wales boss Warren Gatland's decision to omit Brian O'Driscoll from his Lions third Test team in the summer.

And he reacted strongly when asked about it following Wales' win over Italy on Saturday.

"As far as I am concerned, that's dead and gone," he said.

"It's not about Brian and myself. Brian has moved on, I have moved on. It is about 46 players and two nations playing an international next weekend.

"The game is more important than myself and Brian and if people want to make an issue out of that for next week, to me it is just lazy journalism. Move on."