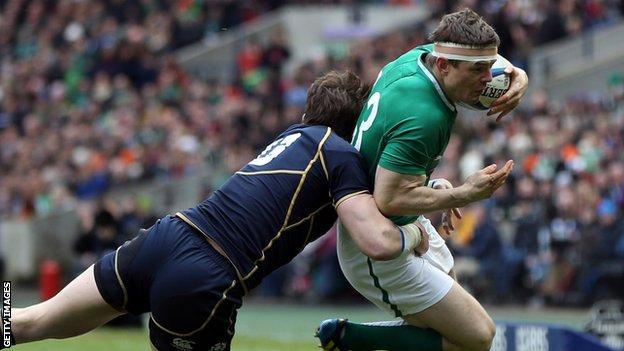 As both these sides know, the opening game of a Six Nations is not always an accurate indicator of fortunes for the rest of the tournament.

Last year, Ireland buzzed into life with an impressive victory at the home of the eventual winners Wales, while Scotland were sent tumbling against England at Twickenham. But, particularly for the Irish, it proved a false dawn.

"I think Ireland will do pretty well. Although they ended up losing to New Zealand in the autumn, there was plenty of evidence of how Joe Schmidt wants them to play in the way they took the game to the All Blacks"

The end result was quite different, as Ireland suffered three defeats - picking up injuries to several players including Jonny Sexton and Simon Zebo along the way - while Scotland found their feet to post a third-place finish.

Ireland's response was to remove Declan Kidney from his post and replace him with Joe Schmidt. A mixed autumn under the former Leinster boss followed, with glimpses of progress, particularly in a heartbreaking, thrilling encounter against New Zealand at the end of the series which suggested the message was getting across.

For Scotland, Scott Johnson's project was all about development, laying the foundations for the arrival of Clermont boss Vern Cotter later this year. Again there were some high points, including the debut of Tim Swinson, and Sean Maitland's stock continued to rise, but line-out failure and a scoreless thumping by South Africa suggested there is work to do if they are to repeat their 2013 efforts.

Brian O'Driscoll's record 129th cap for Ireland should ensure the home crowd provide a suitably raucous atmosphere in the opening game of his final campaign. Whether the Scots will share the same sentiment before and during the match is another story.

Injuries mean changes across the Ireland three-quarter line, with Andrew Trimble brought in on the left, and Dave Kearney switching to the right in Tommy Bowe's absence. Gordon D'Arcy is replaced by Luke Marshall.

Head coach Joe Schmidt has kept faith with the majority of his forward pack, notably with Cian Healy overcoming injury to feature. The only change comes in the back row where Chris Henry covers Sean O'Brien at open-side flanker.

Scotland make four changes to the side that lost to Australia in the autumn. Stuart Hogg, fit again after a wrist operation, comes in at full-back with Sean Maitland moved to wing in place of Tommy Seymour. Alex Dunbar comes into the centres for Nick De Luca.

In the pack, Grant Gilchrist misses out in favour of Tim Swinson and Ryan Wilson takes blind-side flanker ahead of Johnnie Beattie, who has a place on the bench.