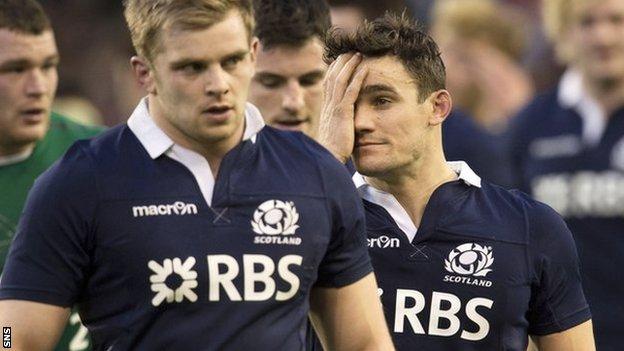 The ability to convert chances and maturity was the difference between Ireland and Scotland in Dublin, says visiting coach Scott Johnson.

"We could not convert when we got into their red zone," he said. "When they got their chances, they converted.

"I think there is a growth in this team that will come with a bit of maturity. We have to stick with the young group and weather the storm."

It does not look good for Sean Maitland, but we have confidence in some of the young ones

Statistics showed that Ireland enjoyed 59% of the ball and 63% of the territory, while the Scots had to make 170 tackles to Ireland's 116.

But Johnson insisted: "We had more opportunities, but they converted theirs.

"We could not keep the pressure on. We show good patches of rugby, but we are not doing it often enough."

Johnson thought the Scots contributed to their own downfall.

"We let ourselves down in certain areas of the game against Ireland," he told BBC Sport.

"It was disappointing. We had good intent, but we got caught playing when we should not have."

However, Johnson remained optimistic that his side will improve, with England their next opposition at Murrayfield after their defeat by France.

"With more time in the saddle, they will get better," said the Scotland coach.

"We go home against the enemy next weekend. Both sides will be edgy."

Glasgow Warriors back Sean Maitland is a major doubt for that game after being forced off in Dublin with an ankle injury.

"It does not look good for Sean Maitland, but we have confidence in some of the young ones," added Johnson.