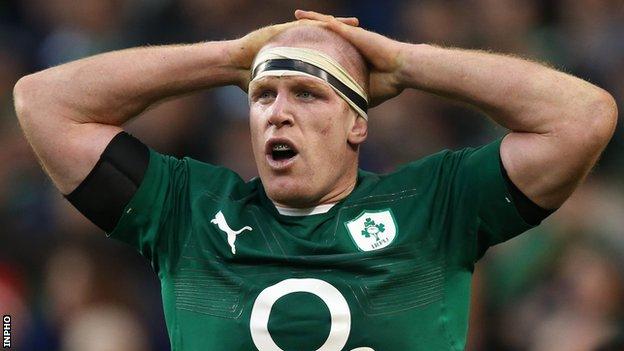 Ireland coach Joe Schmidt expects Paul O'Connell to be fit for next weekend's Six Nations clash against Wales after the captain missed Sunday's opening 28-6 win over Scotland in Dublin.

Schmidt revealed lock O'Connell had been unable to sleep on Saturday night because of a chest infection.

"We would be pretty confident he will be back to full fitness by Tuesday," said the New Zealander.

Schmidt was content with Ireland's display after a "slow start".

Scotland dominated possession in the first half before an Andrew Trimble try just before the break helped the Irish take a somewhat flattering 11-3 lead.

Former Leinster coach Schmidt, taking charge of Ireland for the first time in a Six Nations game, praised an Irish back row that was minus Lions star Sean O'Brien.

Chris Henry replaced the inspirational O'Brien, and the Ulster man's impressive breakdown work was a feature of the Irish display.

"I thought the back row was super. Chris Henry, Peter O'Mahony and Jamie Heaslip all put pressure on the ball," Schmidt said.

"They carried well for us and we got a little bit of pressure on the line-out as well, with Devin Toner and Dan Tuohy doing a good job in there."

Schmidt was unhappy with his team's ball retention in the first period but felt Scotland's tempo had contributed.

"There probably were a few errors in the first half," he said. "We had to work so hard to get the ball back. We would get it back and then give it back.

"That was disappointing and frustrating. But once we got in at half-time, we said that we should keep things as simple as we possibly could and hang on to it.

"We just felt that they would probably transgress at some stage and that we would be able to build a little more on our lead and put them under a bit of pressure defensively."

Ireland have only a six-day turnaround before facing Wales at the Aviva Stadium next weekend, and Schmidt believes that will give their opponents, who beat Italy on Saturday, a "head start".

"We are not going to get a lot done this week," added the Ireland coach.

"We are just going to have to prepare ourselves mentally as best we can and try and reproduce a little of what we did in the second half today."

Stand-in captain Heaslip said his team would have to make "huge improvements" against the defending champions and that Schmidt delivered some "choice words" to the players after Sunday's game.

"I'm sure there will be more on Monday night. Our poor analysts will be working on that and won't see the Super Bowl," added the Ireland number eight.

"It will be a huge challenge to go up against a team that's won this championship two years in a row."