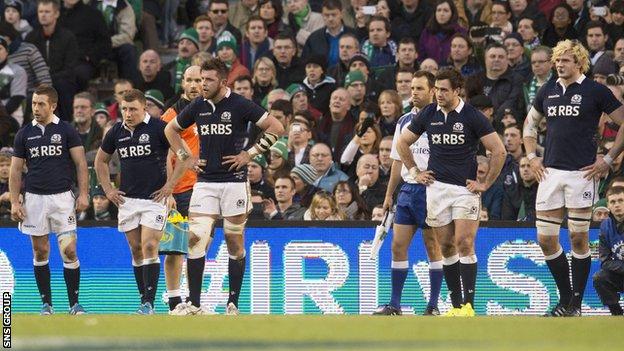 With 37 minutes on the clock in Dublin, Scott Johnson would have been thinking about the content of his half-time speech. And the Scotland coach would have been pretty positive.

He would have been happy with the ambition and execution of skills, but frustrated at some inaccuracies at the breakdown. To be trailing 6-3, he would have said, was an acceptable deficit to deal with.

But what happened with two minutes to play undid all the good work.

Jonathan Sexton feigned to kick on his own 22-metre line and, with Kelly Brown committed to the charge down, he skipped inside and beat the Scotland captain, Moray Low, Jim Hamilton and Greig Laidlaw before setting up Jamie Heaslip.

Max Evans temporarily saved the day by bundling him into touch. The easiest person to point the finger at is Brown, but I don't think he did anything wrong. Scotland were numbers up in defence and he was trying to pressurise the kicker.

The issue was the inside defence from Low and Hamilton. Matt Taylor, Scotland's defence coach, talks about the "hunt" from the inside men, so if a player is beaten then the next defender takes him. He stays alive and has a responsibility to cover the inside step. That didn't happen.

From this defensive error an appalling timing issue at the defensive line-out allowed the ball to be stolen by the Irish, and Scotland subsequently trudged up the tunnel 11-3 down after a few Irish phases.

Suddenly there would have been an air of frustration and disappointment rather than an upbeat team talk.

The critical observer might question the "pretty" nature of Scotland's first-half attack and whether it was too lateral and just going wide for the sake of it. I liked it.

Against what turned out to be a predominantly drift defence from the Irish, it meant easy yards. In the middle third of the pitch it's ideal. The build-up play wasn't the issue and Scotland generally looked comfortable on the ball, with Duncan Weir attacking the line and distributing nicely.

What was missing was the "killer phase"; the strike play or mis-match when on the front foot, the LQB (lightening quick ball) after a line break, or the gamble support line from an offload.

Compare Ireland and Scotland's attack and the only (rather important) factor where the home side were actually better was in their green zone (attacking third) finishing. For those golfers amongst you, the phrase, "driving's for show, putting is for dough" will come to mind.

Positive individual performances were evident. Stuart Hogg had an outstanding game, dangerous on the ball with every touch he had. Brave and confident with the skills to match.

The Scottish management must work out how to get him on the ball where he can cause most damage. In broken phase play I'd like to see him at second receiver where he can use his footwork to stress the opposition front five.

Alex Dunbar stood out too, looking like a 50-cap veteran the way he dealt with Brian O'Driscoll in defence. He was aggressive and smart in his decision-making and marshalled the impressive outside line speed.

Jonathan Humphreys, the Scotland forwards and line-out coach, wouldn't have had much positive to say at half-time, or full-time for that matter.

The line-out is not an easy fix either. If it were just the lift, or the catch, or the call, or the timing or the throw, then a finger can be pointed but the bare facts are that this set-piece has not functioned under pressure in the recent past and it's not because of one factor.

Perhaps a simplifying of things and a focus on sharpness of movement and speed into the air might be the way forward for next weekend.

The scrum continues to cause some concern too and the "to hook or not to hook" is at the centre of the issue. The problem with hooking, I'm led to believe, is that the scrum destabilises when the hooker raises his leg and the scrum is therefore compromised.

The counter argument is if you strike the ball cleanly and quickly and with the correct technique, then the ball can be in and away before you've blinked. I'd certainly adopt this against England.

In my pre-match column I mentioned Ireland coach Joe Schmidt's attention to detail and how he'll have watched the autumn Tests when South Africa scored two tries against Scotland from shift drives. "Fool me once, shame on you; fool me twice, shame on me..." But a third time?

Enough will be said about the negatives of the second half in the media this week and I have a word limit, but the reality of the second half is that if you don't make your first-up tackles, don't defend the driving maul, gain parity in set-piece and win the battle of the breakdown then you don't win Six Nations matches.

There is enough to be positive about though. The first 37 minutes showed what could be done and with a six-day turnaround before England come calling that will be the focus.