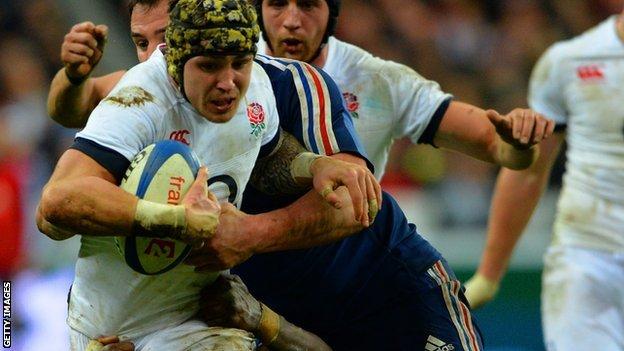 Jack Nowell says the elation of making his Test debut for England overpowered any feelings of disappointment from the 26-24 Six Nations loss to France.

The 20-year-old wing's first touch was a knock-on straight from kick-off, leading to Yoann Huget's try for France inside 32 seconds of Saturday's match.

"To be honest, I've come off gutted with a few mistakes I made and obviously the result," Nowell said.

"But it was more excitement for me that I was out there playing."

The Exeter Chiefs player, who has retained his place in the England squad for this Saturday's clash with Scotland at Murrayfield, added: "For me, there were always going to be nerves because this is something I have wanted for so long."

His debut at the Stade de France, in front of a crowd of 80,000, also saw a chip from Brice Dulin beat him and Alex Goode on the bounce to put Huget in for a second try.

And yet, he said he felt comfortable and at home on the international stage.

"Even before I knew I was starting this game - as soon as I came into the camp, I felt like one of the boys. And that is down to the boys making me feel like that," said Nowell.

"The atmosphere that the Stade had out there was massive - it is something I always wanted from playing rugby and for it to actually happen for me now, I'm just absolutely over the moon with it.

"I made a bit of a mistake at the start and a couple of bounces of the ball didn't go our way either, but we didn't panic and we stuck to what we planned to do," said Nowell.

"I thought we did well to come back after that."

Cornwall-born Nowell, who only played 29 times for Chiefs before getting called up by Stuart Lancaster, said messages from family and friends in the south west made his England bow all the more special.

"My phone has been going crazy with the guys in Cornwall and people from Devon getting in touch," said Nowell.

"I'm very thankful for the amount of support I have got from down there, and all kind messages and it's just a shame I can't reply to everyone."