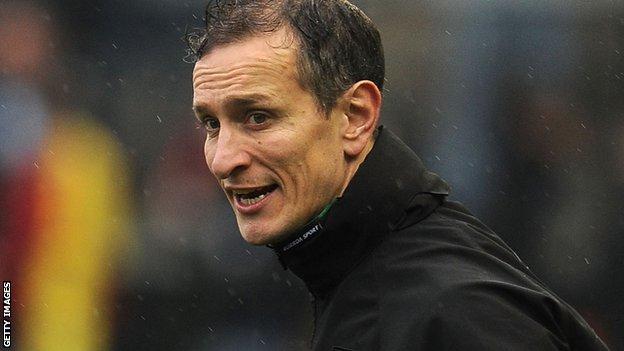 A youthful Saints side ran out 20-16 winners over Saracens in the LV= Cup on Saturday to book a home semi-final.

Dickens told BBC Radio Northampton: "A lot of these boys have come through the academy - Mikey Haywood, Ethan Waller, Ben Nutley and Will Hooley.

"Academy players train with the first team. If it looks pretty seamless, that might be one of the reasons."

He continued: "When I retired in 2010 and went into the academy with Mark Hopley and Dusty Hare, it was a focus from [director of rugby] Jim Mallinder that this was a strong rugby area.

"Players are there from the region to bring through and nurture into the first team," added Dickens, who played at scrum-half for Sale, Leeds, Saracens and Saints.

"You provide the younger lads with an opportunity to play in Under-18s or Under-19s, or the Wanderers [reserve team] or on loan - that's what we focus on, playing games and wearing the Northampton shirt."

Fly-half Hooley was making his first start for Saints against Saracens, having previously played on loan at Moseley and for the Wanderers, and landed a conversion and a penalty at Franklin's Gardens.

"I remember being at Franklin's Gardens when I was a kid, 12 years old and in the [academy] system, watching Saints versus Plymouth Albion," the 20-year-old said.

"That was a packed house, even back then in the Championship. Ever since then, I wanted to get out there in front of that crowd.

"I've been privileged enough to play with the Wanderers and England Under-20s so I didn't doubt my skill or ability to play under that sort of speed."