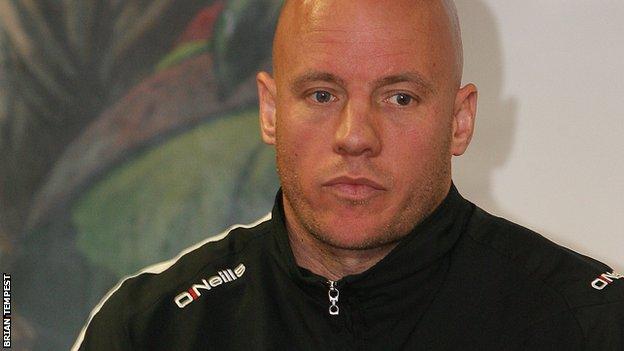 It was the Championship club's second successive loss since the South African took charge at St Peter.

"It's a bit of a reality check for some players. It was a tough day at the office, make no mistake," Biljon said.

Biljon echoed what his predecessor Ben Harvey said of the obstacles the Channel Island club faced 12 months earlier, having risen from an amateur club to being fully professional in the space of five years.

"A lot of our guys, whether they are young or have not been in a full-time environment, need to learn what is expected of them. That is something the coaching staff is challenged with," Biljon told BBC Radio Jersey.

"Both players and coaches alike need to move forward as a professional outfit because that is the only way we are going to be able to compete in this league.

"It will be about our reaction and how we look at training and every aspect moving forward to our next fixture, which is even more important now, against Nottingham."

While Scotland international flanker Ross Rennie inspired Bristol to a comprehensive win with a brace of tries on his debut, Biljon could still find some comfort in defeat.

Tries either side of the break from wingers Mark Foster and Grant Pointer were more than just consolations for the former Cornish Pirates assistant coach.

"We scored a try off a first-phase ball - a fantastic try - and scored a try in the backs again off phase play," said Biljon.

"Something that stood out for us was the fact that our set-piece was taken away from us this time and that has not been the case during the season. Our scrum and line-out has been something to build from - that wasn't there and it hurt us.

"Thus far, the story of the season has been that the pack has gone really well and the backs not so good. We need to put a pack performance and a backline performance together if we want to go anywhere."