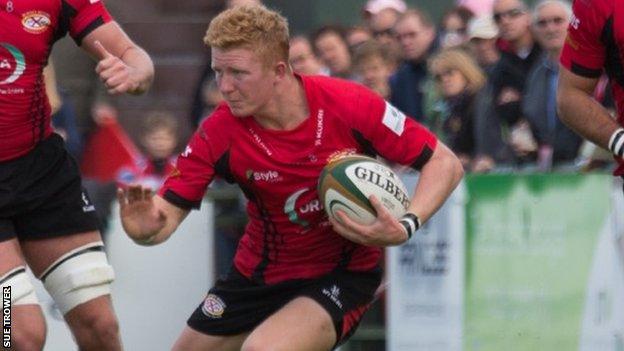 Jersey full-back Jack Burroughs scored in the corner with the final move of the match as the islanders claimed a dramatic 17-13 win over Nottingham.

The Green and Whites took an early lead through skipper Brent Wilson's try and were 7-3 ahead at half-time.

A Matt Jarvis penalty stretched the advantage further but then Nicky Griffiths forced his way over to help pull Jersey level.

Jarvis struck again to make it 13-10 before Burroughs' last-gasp try.

The result means the islanders open up a six-point gap on the Championship's bottom club Ealing Trailfinders, who were thrashed by Leeds on Saturday.

Jersey were behind for most of the game though despite having long spells of possession.

The visitors took the lead when flanker Wilson went over in the seventh minute after good work at the maul. In windy conditions, Jarvis was successful with the conversion.

Niall O'Connor's penalty for the hosts was to be their only score of the first half as Nottingham's defence stood firm against numerous Jersey attacking phases.

The Green and Whites looked to have upped their game after the break but Jarvis missed with two ugly-looking penalties before finding his range and extending the lead to 10-3.

Jersey hit back when replacement scrum-half Griffiths barged his way over the whitewash, before Jarvis held his nerve to put his side back in front with a penalty.

Instead the Channel Islands side sensed a winning try. It came when prop Harry Williams was shown yellow for an infringement at the scrum and then the ball was worked out left to Burroughs, who stayed just in play to score his third try for the senior side.

Grant Pointer's superb conversion curled between the posts in the heavy wind to cap an important win in Jersey's battle to avoid the drop.