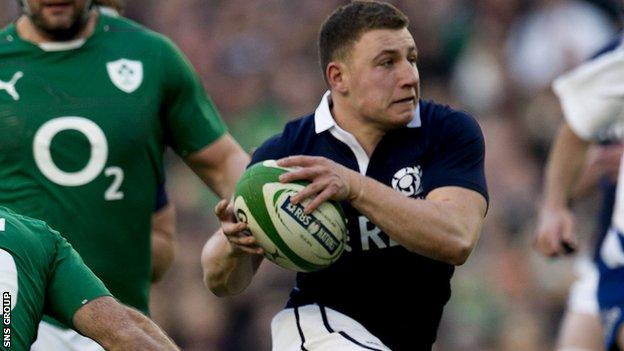 Duncan Weir insists Scotland can take enough positives from their performance in losing to Ireland and face England with confidence this weekend.

"We'll analyse the game and England's defeat by France, but I don't think we'll change too much," the Glasgow Warriors fly-half told BBC Scotland.

"It's just about that final pass and I believe we'll come good in the end.

"It was tough to take. I felt we had quite a lot of possession and we were doing some really good things."

Weir was chosen to start in the crucial number 10 role ahead of club-mate Ruaridh Jackson despite being just 22 years old and being only nine caps into his international career.

"In the first half, Ireland flooded that backfield coverage and we couldn't really apply pressure as easily as they did with us.

"I think they pinned us back after they got a couple of tries and they made it hard for us to attack from so deep.

"We just weren't that clinical when we got up to their 22, but we did have a number of chances in that area.

"I thought we were attacking pretty well. It was just that final little clinical edge we need to bring to our game, but I thought we moved the point of attack very well and kept Ireland guessing.

"We are a young side and have plenty of time to grow as a team together. Once we do that, we'll get over the whitewash and cause damage to teams."

Scotland contributed hugely to their own downfall in Dublin, with their line-outs a mess, missing 17 tackles and conceding 11 penalties.

And lock Tim Swinson, who was making his debut in the tournament, says the team have to face up to their weaknesses and try to rectify them quickly before England arrive at Murrayfield.

"It was not a good result for us and there was quite a big gap between the sides," he said.

"There were some positives that we can look back to but we can't hide from the fact there is a lot we need to work on.

"There were spells in both the first half and the second half where we looked like a good side who could beat any of the other sides in the Six Nations.

"But then there were obviously times when we didn't do anything like that.

"We need to find that consistency in our performances that will improve our results and allow us to win games.

"We will review that game but there will be a lot of soul-searching. We will look at what we did wrong and hope to improve on that because it doesn't get bigger than England at Murrayfield and we have to put up a better fight."