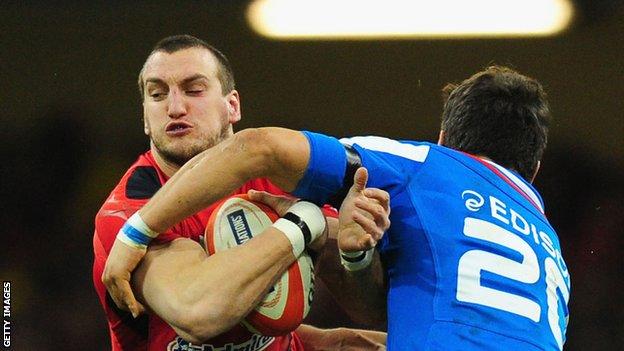 The Cardiff Blues flanker is named at open-side, with Ospreys' Justin Tipuric dropping to the bench.

Warburton takes over the captaincy from second row Alun Wyn Jones, who led the team in their 23-15 win over Italy.

Ireland started their campaign with an impressive 28-6 victory over Scotland.

There is no place in the Wales squad for centre Jonathan Davies, who made his comeback for the Scarlets on Saturday after two months out through injury.

Warburton came on as a second-half replacement against Italy - his first appearance since injuring a shoulder against Australia in December.

Scarlets lock Jake Ball, 22, could be in line to win his first cap from the bench having been called into the squad in place of the suspended Ian Evans.

Australian-born Ball qualifies for Wales thanks to his father, who is from Colwyn Bay.

"Sam is one of the best at stealing and pinching ball at the breakdown," said Gatland. "We are lucky to have two excellent sevens but Sam gives us some physicality."

Davies is likely to be given another run-out for the Scarlets against Treviso this weekend, having played just 40 minutes in the past two and a half months.

"Jonathan isn't quite right, he is training with us and will have another game next week," added Gatland.