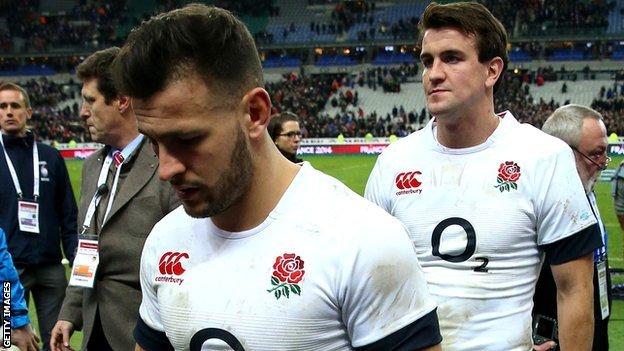 England's defeat had more to do with missed opportunities and dubious decision-making. Leading 24-19, they needed to work themselves into a position where they scored a try, dropped a goal or kicked a penalty - but just at the crucial stage, errors were made.

That said, I wouldn't want to bring a player off unless he was really flagging and had started making mistakes and bad decisions. And from where I was sitting, scrum-half Danny Care seemed to be on top of his game when he was replaced by Lee Dickson after 62 minutes.

England's players were wearing GPS tracking chips but Lancaster says the information was not used in real time and only referred to afterwards. I have no reason not to believe him. Care has only played 46 minutes for Harlequins over the past month, which presumably influenced Lancaster's thinking.

The coaches are in a much better position to make decisions about replacements than me or the fans, because of the information they are receiving from coaches on the touchline and other players.

You [the media] are debating the wrong points. The replacements were not the reason we lost the game. I'll make my substitutions next weekend the way I have always done, based on my intuition and the way I see the game unfolding. I don't have a pre-determined plan

The risk changing the scrum-half is that he's the player who touches the ball most. He's the tempo of the team, deciding whether to pass, kick or run.

Dickson is a different kind of scrum-half. Care gets a lot going himself with his quick taps, breaks and kicks; Dickson is a guy who gets his team-mates playing by passing and moving. So it did affect the tempo, but not in a disastrous way.

However, you feel that if Care starts the game against Scotland on Saturday, he will stay on longer if he's playing that way again. He will have given the coaches feedback, telling them he could have carried on until the final whistle.

In my era, no-one wanted to be substituted unless they were injured because no-one wanted to give another player the chance to take their place for the next game. Players should have pride in their ability to play 80 minutes, so if their opposite number gets taken off, they should want to put away his replacement, too.

I wouldn't tell any of my players when they were coming off because I would want them to be playing at full pelt and not looking towards the bench after 45 minutes, which I'm guessing some of them do.

The substitutions cost England the game and that responsibility falls on the management, not the players. There were fundamental coaching errors, the players did not deserve it and it is time to wise up

In the professional era it is commonplace that the whole front row will be changed shortly after the start of the second half. France had changed their entire front row by the 50th minute and the modern trend seems to be that the opposition react to that.

And when you look at Lancaster's other substitutions in that eight-minute second-half spell, some of their contributions were significant. Tom Youngs and Mako Vunipola made an impact in the front row, while Ben Morgan was hardly any different from the rampaging Billy Vunipola at number eight.

As for Alex Goode, they must have thought he'd be better at full-back when Jonny May got injured because Mike Brown has played on the wing at that level more often.

Maybe they should have had someone like Bath's Anthony Watson, who can cover full-back and wing, on the bench.

But Lancaster had debutants Jack Nowell and Luther Burrell in the backline, as well as May and Billy Twelvetrees, who have only a handful of caps between them. If things had gone really badly, people would have put it down to inexperience.

Then there is Sir Clive Woodward's suggestion that Lancaster should have had a specialist fly-half on the bench to cover Owen Farrell, who was struck down with cramp towards the end in Paris.

But Woodward only had Mike Catt as cover for Jonny Wilkinson in the knockout stages of the 2003 World Cup, while Goode can play fly-half and Twelvetrees is as much a number 10 as 'Catty' ever was.

England had the better of the second half until the last four minutes. They had scored the most points, and overturned a big deficit. But because England lost, there are question marks about Lancaster's replacements.

Meanwhile, France head coach Philippe Saint-Andre is suddenly a genius, because he put Gael Fickou on after 74 minutes and he scored two minutes later. But we are talking about the unknown.

It is the result that makes the substitutions right or wrong. What would have happened if Care had stayed on? Would England have won? Or would he have tired and made a mistake? We will never know.