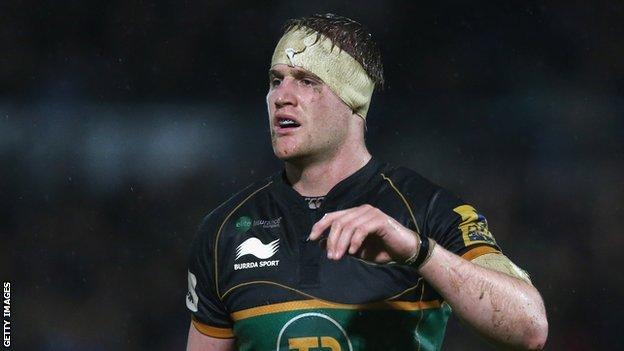 Worcester Warriors have made a major signing for next season by bringing in Gerrit-Jan van Velze from Northampton.

The South African back row, 25, will move to Sixways after two seasons with last year's Premiership runners-up.

He follows the same route taken by new Warriors fitness coach Nick Johnston, who joined the club in November.

Staff changes for next season

Rotherham captain Mulchrone, 24, is predominantly a number nine, who can play in either half-back role.

Ospreys tight-head prop Rees, 23, has represented Wales at Under-18 and Under-20 level, and centre Stevens, 24, has been an ever-present in the Championship for Plymouth this season, playing in all their 13 matches.

But, at a time when the Warriors are rooted to the bottom of the Premiership table, it is the signing of Heineken Cup regular Van Velze that looks most significant.

"It is fantastic that GJ has decided to join us," admitted Warriors director of rugby Dean Ryan.

"He is an experienced Premiership player with strong leadership qualities who we see being influential on the pitch, as well as joining a strong leadership group to help us build a new culture here at Worcester."

Van Velze added: "I had a conversation with Dean Ryan, during which he explained the challenge ahead.

From Bulls to Warriors

"I know Nick Johnston from his time at Northampton so it is clear that players are looked after on and off the pitch and it is an environment which will allow me to grow as a player and a person."

The recruitment of Van Velze, Mulchrone, Rees and Stevens, coming on top of Cardiff Blues flanker Andries Pretorius and Gloucester pair Matt Cox and Ryan Mills brings the number of Worcester signings for 2014-15 to seven.

However, the club have not revealed the respective length of the players' contracts, or even whether there might be any release clause should Worcester be relegated to the Championship, as seems increasingly likely.

They have also been linked with Harlequins winger Sam Smith - and there are more ins and outs expected before what looks likely to prove a summer of major upheaval at Sixways.

Worcester return to Premiership action at home to Leicester on Friday evening, 11 points adrift at the foot of the table, having lost all 12 league games this season - and 17 in total in a run dating back to 1 March, which equals the joint second worst record since the competition began.

The worst run is Rotherham's 30 straight defeats, which began in February 2001 and stretched through to the end of the 2003-04 season.