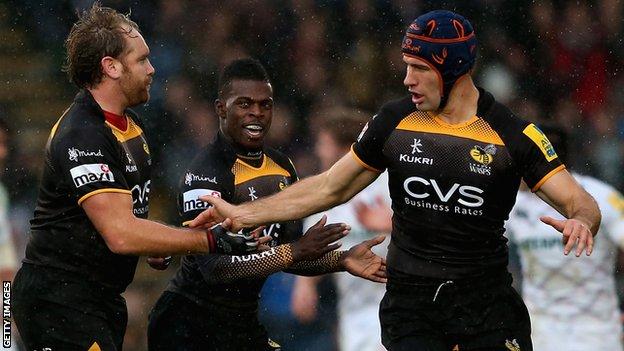 Captain Chris Bell has said London Wasps are a more ruthless outfit than they were at the start of the season.

Sixth-placed Wasps face Harlequins on Sunday, five months after on the opening day of the league campaign.

Bell told BBC Sport: "We went through a number of games where we were very close and not picking up the wins.

"It was my first rugby club. I left school, came up to London and played three years there.

"I remember Ugo Monye making his debut and playing with him as well.

"I have fond memories, it's always a place I enjoy going back to.

"Any game against your former club has a bit more spice about it."

"It meant we weren't getting over the line. We worked on that - to try and be on the right end of narrow victories."

Director of rugby Dai Young oversaw a summer of upheaval at Adams Park, bringing in 17 new players, more than any other Premiership side.

The season opener against Quins at Twickenham ended in despair when fly-half Andy Goode's last-minute penalty came back off a post to deny Wasps victory.

Young's men would go on to register just one win in their first five league games, although none of those were lost by more than a converted try.

And Wasps have found a way to turn narrow defeats into wins, with six victories in their last nine Premiership matches, and they would leapfrog fourth-placed Quins with a triumph at the Stoop on Sunday.

"There were a lot changes in the summer and Quins on the opening day was a lot of players' first game for the club. We're a lot more fluid as a group.

"We essentially have the same core values that underpin us, but the group is definitely moving forwards.

"We're aware of how big this game is now. There's 10 games left and every one will manipulate the table to some extent.

"It's a big challenge to go to Harlequins but one we're looking forward to."