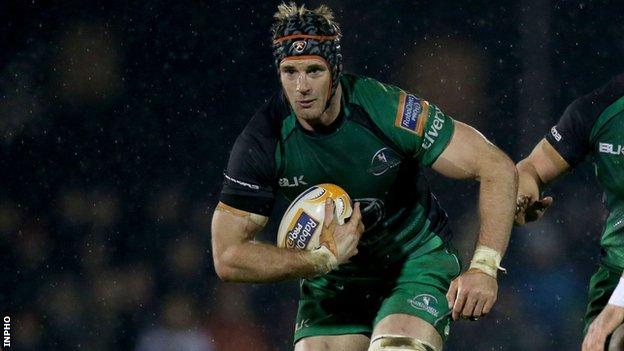 Connacht captain Craig Clarke has been sidelined indefinitely after suffering a 10th concussion in 22 months during the 64-6 Heineken Cup loss to Saracens.

New Zealander Clarke signed for the Irish province last summer after leading the Chiefs to back-to-back Super Rugby titles in 2012 and 2013.

The 30-year-old will be out of action while he has further tests.

"You can just not mess around with that sort of situation. He is a big concern," said Connacht coach Pat Lam.

"At this stage he is going to be unavailable indefinitely, until there is a bit more testing and so forth."

Connacht go into Sunday's Pro12 contest at Glasgow bottom of the table after Zebre moved above them in the most recent round of fixtures in early January.

But Lam said Clarke's health is a greater priority than the team's fortunes.

He said: "The players had a week off after the Saracens game but he was suffering even last week.

"Obviously we favour investigations, but more important is just time.

"I had a player before who has had that as well, Benson Stanley, and he was considering retiring and he just had to go through the timing and was thinking about stepping down.

"But through timing and treatment and rest he got through and he is playing at Clermont now, so we are hopeful."

Given the increasingly physical nature of modern rugby, concussion has become a major concern in the sport.

On Tuesday, former England flanker Andy Hazell retired after failing to recover from a pre-season concussion.

In January 2011, Carrickfergus schoolboy Ben Robinson, 14, died from "second impact syndrome", as a result of concussion suffered while playing in a school rugby match in Northern Ireland.