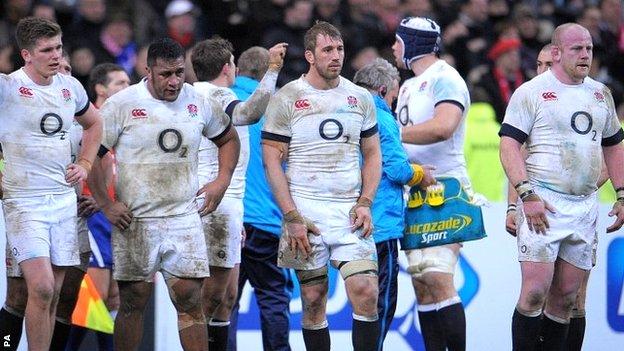 England are "angry" and "hurting" ahead of Saturday's Calcutta Cup game against Scotland at Murrayfield, according to forwards coach Graham Rowntree.

A converted try four minutes from time condemned England to a 26-24 defeat by France in their Six Nations opener at the Stade de France on Saturday.

"We want to win the championship more than ever now," Rowntree told the BBC.

"It's going to be a huge game for us. The next game usually is, but after last week, the guys are hurting."

England, with no injury concerns, are expected to field the same group of forwards for the third Test in a row.

"It will be a settled, angry pack," said Rowntree. "They are not happy with what happened at the end of last week.

"We have to be honest with ourselves, we can't lose a game like that in those circumstances again.

"The lads were very down, because they poured themselves into that game and did enough to win. But we've got to look forward, because we've got another big challenge this week."

After impressing in a 30-22 defeat by New Zealand in November, the England forwards largely performed well again in Paris, but Rowntree acknowledged key mistakes at crucial times were costly.

The former England prop said: "We have to perform small things better under intense pressure.

"At Test level, it's about doing the little things well - and we have to do that better than we did last week. That intensity, which I've been asking for, was there, but it's up to me to iron out those wrinkles."

Having trailed the All Blacks 17-3 during the first half in the autumn, England were 16-3 down after just over 20 minutes against France.

And Rowntree says his side need to be "more switched-on" when Saturday's game gets under way.

The corresponding game at Murrayfield two years ago, which England won 13-6, was the first of head coach Stuart Lancaster's tenure, and Rowntree believes huge strides have been made in the meantime.

"We've learned a lot," he said. "And I think our performances and our style of play will testify to that."