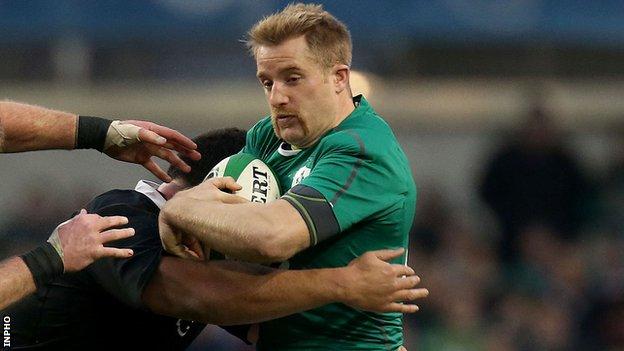 Leinster pair Luke Fitzgerald and Eoin Reddan will again not be risked in Ireland's second Six Nations clash, against Wales on Saturday.

Wing Fitzgerald was unavailable for Sunday's 28-6 victory over Scotland because of a hip injury, while a calf strain ruled out scrum-half Reddan.

Ireland team manager Mick Kearney said on Tuesday that neither would be considered for the Wales game.

The 34-year-old was a late withdrawal from the victory over Scotland because of a chest infection, with Ulster's Dan Tuohy stepping in.

Kearney said on Tuesday O'Connell is "up and about again" and the British and Irish Lions forward is expected to resume training later this week.

Full-back Rob Kearney was rested from Tuesday's light training session because of a leg knock but his fitness for Saturday's match does not appear to be in doubt.

With Fitzgerald missing out, Ulster wing Andrew Trimble, who scored the first try against Scotland, looks likely to hold on to his starting role.

Fitzgerald and Reddan could be released back to Leinster for Sunday's Pro12 game against Zebre in Italy.

And the Ireland management hope Tommy Bowe could return to action in Ulster's game against the Scarlets on Friday week.