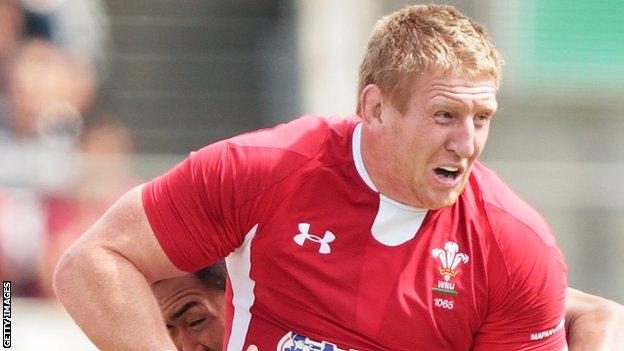 London Wasps will sign Wales lock Bradley Davies from Cardiff Blues at the end of the season.

Davies, who has played 114 times for his region, has 42 Wales caps and was captain for the 2013 tour of Japan.

Wasps boss Dai Young, who coached the 27-year-old Davies at Cardiff, said: "He is a proven leader."

Davies becomes the latest Wales international to leave a domestic region, after

The British & Irish Lions full-back will quit the Blues for the French club in the summer, while Wales wing George North left Scarlets for Northampton Saints last year.

In an attempt to prevent an exodus of talent, the Welsh Rugby Union signed national captain

"We are disappointed to see Bradley leave. He has been brought up through this region and he has done a great job for us over the years," said Blues director of rugby Phil Davies.

"We wish him and his family all the very best down in London, I am sure he will be a success playing under Dai Young."

Bradley Davies said: "I have been with the Blues since I was 17 and I have a huge amount to thank everyone there for, but I am also hugely excited about playing in a new league with a new club."

with an ankle ligament injury sustained four weeks ago.