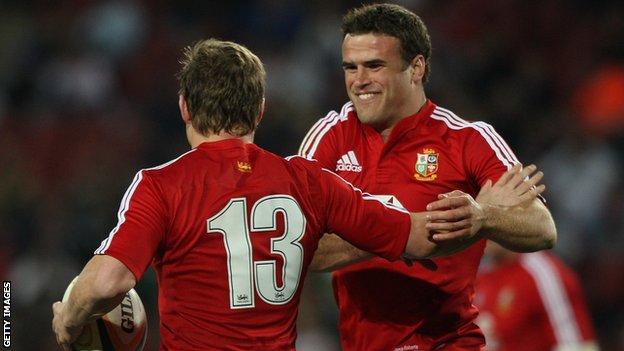 The talismanic Irish centre was controversially dropped for the Lions' victorious final test decider against Australia by coach Warren Gatland.

Welsh centre Jonathan Davies was picked in O'Driscoll's position but it was Roberts who came into the side.

It's certainly something they [Ireland] will be using as motivation... but we are up for the challenge

"I've had a few laughs with Jon over that," said Roberts.

"He [Davies] took a lot of stick last summer. It was actually me who came into the team but I didn't take any stick whatsoever, which was nice.

"It was because I play 12 and obviously Jon plays 13, which is the same position Brian plays."

Both sides won their opening matches of the tournament, with Wales beating Italy and Ireland overcoming Scotland.

As the build up to the match intensifies, former Ireland captain O'Driscoll, who is believed to be playing in his last Six Nations, insists he has no animosity towards Wales coach Gatland over his Lions omission.

Gatland came in for fierce criticism, but the team he selected won the third Test in Sydney 41-16.

Roberts, who partnered O'Driscoll in midfield for the Lions on the 2009 tour of South Africa, expects there to be a hostile atmosphere on Saturday as a result.

"It's a sub plot. A lot will be made of it and it's certainly something they [Ireland] will be using as motivation as well but we are up for the challenge."