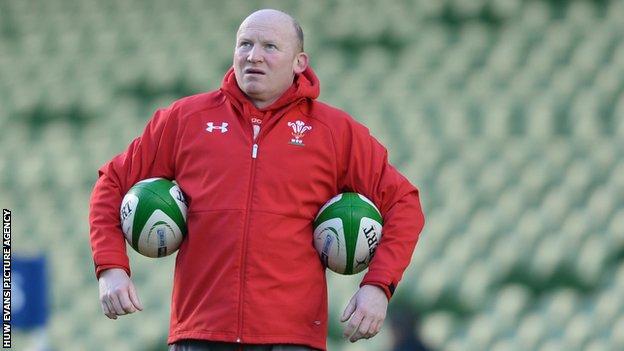 Wales skills coach Neil Jenkins says kicking could be crucial in determining if his side wins Saturday's Six Nations clash against Ireland in Dublin.

With rain and gusty conditions forecast for the Republic of Ireland, capital Jenkins says Wales' kicking game must be accurate and tactically spot on.

"Certainly there will be a lot of kicking," said former Wales and British and Irish Lion Jenkins.

"But it's got to be accurate kicking and the right type of kicking as well."

Jenkins says dealing with the conditions will be crucial.

He added: "We've obviously been told that supposedly there's a lot of rain coming, probably windy conditions [too], so it doesn't suit a ball-in-hand game.

"But we'll get to that point when tomorrow comes.

"Our main focus is on ourselves and whatever we bring to the party."

Wales are bidding for what would be a record third straight Six Nations title and opened their defence with a 23-15 win over Italy last weekend in Cardiff.

Ireland also won their opening match with a 28-6 win at home to Scotland.

The Irish were the only side to beat Wales in the 2013 Six Nations and Jenkins is expecting a tough afternoon.

"We know it's going to be a very tough game for us," said Jenkins.

"Ireland are obviously a very good side, but again the boys have been there and done it.

"They've [Wales] won most of their away games in the last two years of the Six Nations so it's just another challenge again for us.

"There's a calmness and bit of an edge to us as well."

Ireland have a new coach in charge since the sides last met - New Zealander Joe Schmidt.

It is the former Leinster boss' first Six Nations and Jenkins says Wales are prepared to counter his influence on the Irish.

"Jo's only just come in. He's an outstanding coach and did a fantastic job at Leinster," said Jenkins.

"I'm sure they are going to have certain things up their sleeve tomorrow and a lot of plays that we might not have seen.

"But again we've got to adapt to that.