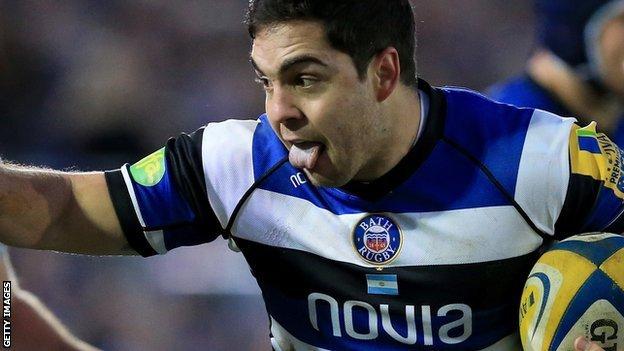 A shaky George Ford kicked just one of his four first-half penalties to put the hosts ahead.

Phil Godman landed penalties either side of the break to put Newcastle in front while a man down.

Quick tries from Agulla and Houston put Bath in control, with Louw crossing late and Ford converting all three.

Victory sees Bath move back to third, ahead of Leicester Tigers after their narrow victory against bottom side Worcester on Friday.

Meanwhile, Newcastle's defeat extends their losing run in the league to seven games.

With Ford released from England's Six Nations squad, along with backs Kyle Eastmond and Anthony Watson, Bath were missing only Wales duo Dave Attwood and Paul James on international duty.

And yet second-bottom Newcastle stubbornly resisted the hosts in the opening half, with Godman making it 3-3 after the Bath fly-half finally managed to find the mark with his third attempt.

While penalty misses by Ford helped the Falcons' cause, their defence stood strong under siege, even when prop Oliver Tomaszcyk was sin-binned on 35 minutes.

And they were still down to 14 men when Godman slotted Newcastle ahead two minutes into the second half.

Bath's response was swift, with Ford finding replacement wing Agulla on the right touchline to score, before an inside pass from the fly-half set up Houston to touch down under the posts.

Newcastle struggled to get out of their own half after that, but they held firm until the final minute when Louw crossed.

"The first half was very stop-start. We wanted to play with tempo and they wanted to slow the football.

"They achieved that better than us in the first half and the conditions made it easier for them.

"I've got to give credit to Newcastle, I thought they played well at times. At one point, when they were 6-3 up, they would have been licking their lips for a big scalp.

"But we showed great resilience, didn't go into our shells - and even when we made mistakes, we kept playing. I'm just pleased we came away with four points."

"I thought we were hugely competitive all day long and they'll go away thinking they haven't had an easy game at all.

"The scoreline certainly flatters Bath but they created more chances than we did in the second half.

"We probably created more than them in the first half. Overall, they certainly got the better of us."