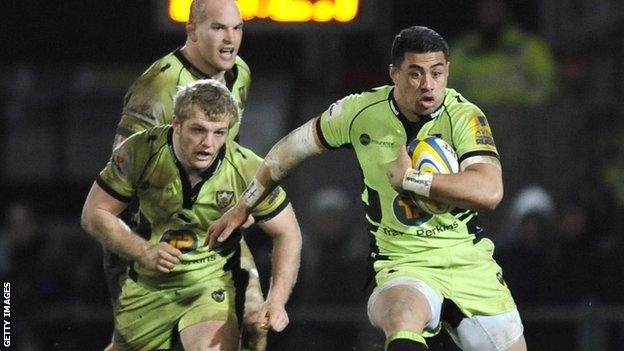 A late converted George Pisi try gave Northampton Saints victory over Exeter Chiefs in difficult conditions as they climbed to the top of the Premiership.

James Wilson and Samu Manoa crossed for the visitors as they opened a 10-9 half-time lead, with Gareth Steenson kicking three penalties for the hosts.

The Chiefs went in front when Dave Lewis darted through to touch down.

Rob Baxter's side showed impressive defence but Pisi went over late on to leave Stephen Myler to kick the extras.

Northampton moved one point ahead of Saracens, who lost at home to London Irish earlier on Saturday.

With skipper Dean Mumm in the sin-bin for stamping, the hosts took an early advantage when Steenson kicked the first of his three penalties after being caught high in the tackle.

But Saints crossed for their first score when Wilson was on hand to touch down after the visitors had kicked a penalty to the corner.

Steenson kicked penalties either side of the powerful Manoa going over for Northampton, television match official Ashley Rowden ruling he had touched down before being bundled into touch, as Jim Mallinder's side held a one-point lead at the interval.

Northampton's Gerrit-Jan van Velze, on for the injured Christian Day, was shown yellow for preventing the hosts taking a quick tap penalty, and Exeter made the most of the extra man.

James Scaysbrook was held up over the line but from the resultant scrum Lewis found a gap to cross, Steenson landing the conversion.

As the weather deteriorated, Northampton piled on the pressure in search of the converted try that would give them victory and with time running out, after a series of five-metre scrums, Pisi burst through.

Myler kicked the extras as Saints claimed a dramatic win.