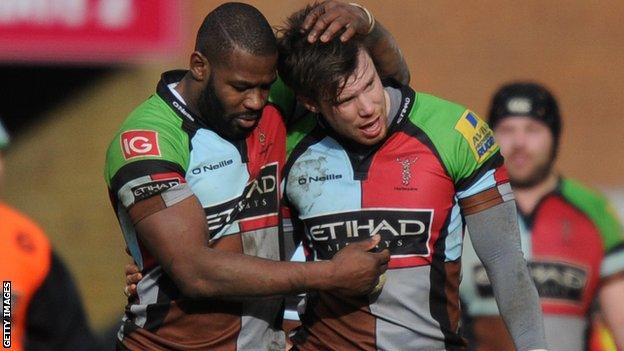 Harlequins moved up to fourth in the Premiership table with another dramatic late victory against London Wasps.

Ben Botica's penalty reduced the gap to four points and winger Smith dashed Wasps' hopes of avenging their narrow loss to Quins in the opening weekend.

Conor O'Shea's men had edged a thrilling contest at Twickenham by a single point in September, with Wasps fly-half Andy Goode missing a kick to win the match in the final seconds.

In the last eight Premiership meetings between Harlequins and Wasps, only once has the margin of victory been greater than seven points

The former England international was a late withdrawal because of a knee injury but his replacement Carlisle quickly settled into the match, landing the game's first points after Quins were penalised at the line-out, before Evans responded with a penalty of his own.

Wasps, with a strong wind in their favour in the first period, dominated territory and were awarded a penalty try by referee Luke Pearce when the hosts pulled down a powerful scrum a yard from the line.

He limped off shortly after the interval to be replaced by Botica, who sliced his first penalty attempt horribly wide.

Maurie Fa'asavalu's huge hit on Wasps centre Andrea Masi brought the home side to life and set the platform for a Harlequins attack that saw Botica reduce the deficit to four points.

Quins pressured the visitors' line in the dying minutes and took the lead for the first time when the ball was worked out wide to Smith, who touched down on the whitewash despite the best efforts of James Short to keep him out.

Although Botica missed the resulting conversion, Smith's effort proved to be the decisive score.

"The best team lost today, without any doubt. We didn't play with any shape or form and won't play like that again.

"We didn't hold on to the ball well enough but all credit to the players for displaying mental toughness and hanging in there to sneak a win at the end.

"We are still in the top four and have Newcastle at home next week. Playing conditions will improve and at the end of the season this will be a golden result for us."

"Sometimes in sport, you don't get what you deserve. We were in control for the huge majority of the game and I feel very sorry for the players.

"We had lots of positions in the first half but we let too many opportunities slip. The forwards did very well but we lacked composure and were over eager in their 22.

"We gave them the opportunity to sneak it late on as our discipline let us down in the last 10 minutes, but we are happy with our performance and our bonus point."

Replacements: McIntyre for Mullan (66), Lindsay for Festuccia (68), Swainston for Cooper-Woolley (66), Thompson for Jones (72).